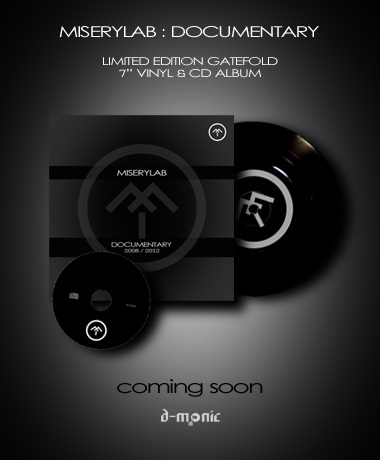 ✖ Pre-order now and get the number you wish, first ordered, first served, follow the link for details :  Click Here!

Miserylab is Porl King's solo project (in the 90's he was the frontman of a band called Rosetta Stone) - releasing 5 studio albums since 2008.

A purely dark post-punk approach - of large chorusing bass and guitar - up front unmistakable drum machines and new wave synthesizers ... there's no self-indulgence here - this is about connecting - and connecting immediately lyrically and melodically.

Documentary is a retrospective collection of classic Miserylab material - stemming 2008 to present day .. including some of the earlier - possibly overlooked tracks such as 'making a bomb' to the more well known anthems such as 'people' and 'children of the poor' .. coupled with a 7" single of recently recorded previously unavailable in hard format singles and rarities .. as with all Miserylab albums there isn't a single second of filler here ... as the CD moves chronologically - there is a tangible sense of progression as the tracks become dynamically bigger and stronger - as the consistency of song-writing is maintained from start to finish ...

Miserylab wears it's heart on it's sleeve - there is no diplomacy or shying away from issues or it's political stance - this is pure anti-capitalism - anti-war - anti-right-wing .. and if you disagree with it - if you challenge it - it will answer you back ... there are no apologies given ... Miserylab is on the side of the poor - the voiceless those who have done right even those who have done wrong - it will always stand against authority under any circumstances .. if this makes you uncomfortable - it's meant to - Miserylab is uncomfortable ..."

-From The Miserylab Official Release