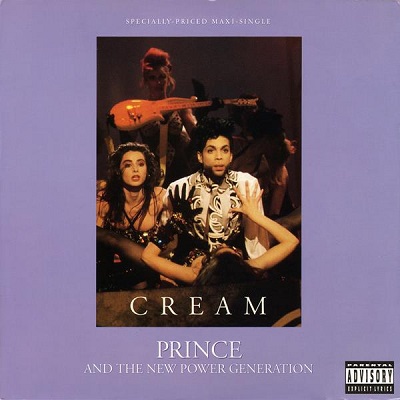 Cream on a business standpoint was the forth most successful song ever made by Prince. On an audio standpoint it is considered to be one of his more sensual songs. It was released on as a single (4 different formats) and as part of the album, Diamonds And Pearls.

The song Cream was written and produced by Prince, but were proformed by both him and The New Power Generation. The album was recorded at Paisley Park Studios in the winter of 1990 and was officially released in September 9th, 1991. It was released under the umbrella of Paisley Park and Warner Bros. It gained the RIAA certification of being a Gold album on January 16th, 1992.

In the United States, Billboard Hot 100 ranked Cream as #1 on their charts for two weeks. It was the fifth and final song released by Prince to reach #1 on these charts. While it was in the top position it prevented Bryan Adams hit, Can't Stop This Thing We Started from peaking at number one. It was only in the Hot 100 charts and not the R&B charts due to the song never being sent to Urban Radio. The song also reached #2 in Australia, #3 in Norway and Switzerland.

Hayden Clement did the composition intro, sounde design, and music editing for the official video to Cream (shown above). The video does a superb job of presenting the tone for the song and giving a presentation of it performed in a concert setting. Prince's live performances has always been considered among the best in Pop, R&B, and Funk music. This video does a good job at presenting him in that respective light.

Cream has remained relevant throughout the years. It has been played in dance clubs worldwide and has garnered special attention by many members of the music community that have made covers of this Prince hit. Most notably are the covers by Scottish Electronica artist, pom Deter, and English DJ Simon Bangs. Simon presented his cover of Cream at the Numark Company Picnic in the summer of 2010.