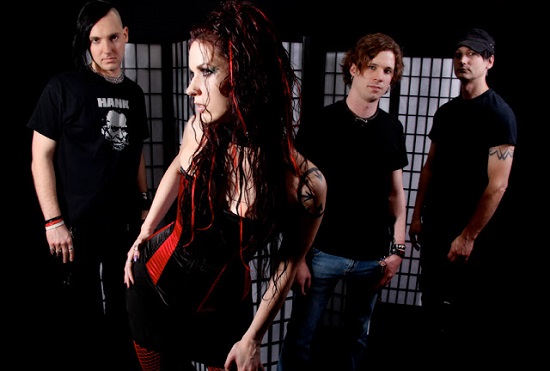 Chicago’s I:Scintilla (pronounced “eye-sin-til-uh”) have spent the last decade on a constant pursuit of musical exploration and artistic refinement. Never happy with genre boundaries, the quartet has taken its metal-infused electronica signature and drawn in elements of synth pop, trip-hop, and indie electro. The band’s brand new EP “Marrow 2″ is an excellent representation of these new influences and styles. It features four new studio recordings that range from catchy club stompers (“Skin Tight”, “Sequins & Pills”) to groovy sludge (“Ruin”) to cinematic electro-rock (“Drag Along”). The EP includes four remixes that also traverse a spectrum of genres: funk, club-friendly EBM, and even a hint of dubstep.

he band is led by dynamic frontwoman Brittany Bindrim, whose words, melodies, and emotive vocals have resonated with a devoted and growing fan base. Rounding out the lineup are Jim Cookas (guitar/programming), Vincent Grech (drums), and John Freriks (guitar/programming). Over the years the band has established a solid reputation as a live act with their high energy shows that feature a mix of rock and electronic elements.

I:Scintilla self-released their debut album “The Approach” in 2004. Through relentless promotion and a strong online presence, the group soon attracted attention from established indie labels and eventually signed with Belgium-based Alfa Matrix in early 2006. Their first set of releases included the EP “Havestar” (2006) and full-length album “Optics” (2007). Both efforts managed to chart on Germany’s Deutsche Alternative Charts (DAC) with the former reaching #13 on the singles chart and the latter #6 on the albums chart. They soon followed with the DAC-charting EP “Prey On You” (2009) and full-length album “Dying & Falling” (2010). I:S returned in 2012 with two digital singles (“Swimmers: Remixed” and “Skin Tight”) and an EP of acoustic songs called “Marrow 1.”

Other notable accomplishments include festival appearances in the United States and Europe, most notably at Dragon*Con in 2012 and 2010 and at Germany’s Wave Gotik Treffen in 2007. They also appeared on the long-running independent music program JBTV in 2012 and 2007 and have been featured in nearly every alternative music magazine in Germany and several in England, Belgium, and Italy. In 2008 the band hit the road with darkwave mainstays The Cruxshadows for an extensive three-month U.S. tour that brought their live show to every corner of the United States.