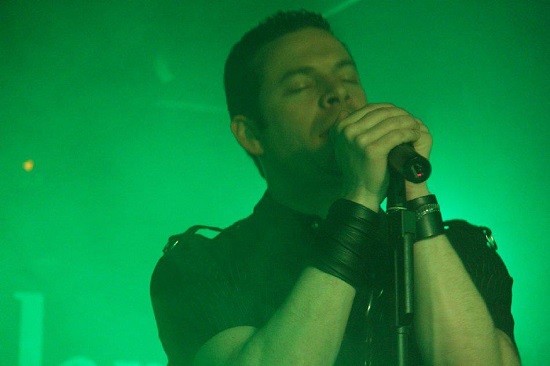 halovox features intelligent, emotional lyrics and melodic modern music that sounds new yet nostalgically familiar to fans of 80s alternative, electronic and industrial. What sets halovox apart from other electronic bands is the songwriting and vocals of its creator, Frank J. Freda. Heavily inspired by artists such as Depeche Mode, Camouflage, Front 242, Nitzer Ebb, Ministry and Nine Inch Nails Frank set out to create a sound that would honor these influences and also break new ground.

The first official halovox production was a 2003 remix of A Different Drum artist The Echoing Green. halovox contributed "Fall Awake (Catcher in the Rye Mix)" which appeared on the "Fall Awake" single. halovox released 4 songs over the internet in 2003 that were very well received. Among them, "Deception" received airplay in clubs around the world and gained major support from DJ Tim Cody, host of Subculture Live on the world famous WLIR on Long Island. Those first four songs plus an additional nine original compositions and a breathtaking cover of the Depeche Mode classic "Fly On The Windscreen" made up the 14 track debut halovox self-titled CD released in the summer of 2004. In support of this release, halovox played numerous dates in the New York, Long Island and New Jersey region.

In 2004, A Different Drum requested another remix, this time for Provision. halovox remixed "Each Second Suffering" which appeared on a limited edition bonus disc bundled with the Provision album "Visualize". Then in 2005, "Retrospect" by halovox was invited to appear on A Different Drum's massive 6 CD "State of Synthpop" collection. Also in 2005, "Deception" appeared on WSVN Radio Hall of Fame compilation Volume 15. halovox also participated in some high profile shows, opening for Freezepop at the 2005 New York Synthpop Festival and APB at Subculture in December of 2006.

After a hiatus from 2007 to 2009, halovox began playing live shows again in 2010 and songs were being written and refined for the second album. In January 2012 halovox released their highly anticipated second album "Everybody Lies". The album contains 12 new songs that feature the trademark halovox sound of intelligent and emotional lyrics coupled with danceable electronica that ranges in style from synthpop to industrial. Featuring live show favorites "Everybody Lies", "Mask", "Stalker", "It's Not Me It's You" and "iGod" the new album showcases the ongoing evolution of halovox .