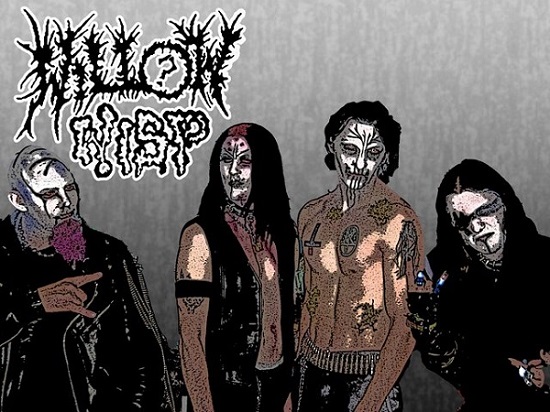 Transition has been a relative term that aptly describes the musical chameleon known as Willow Wisp. Given decrepit birth to in anno 1987 by founders Toe Knee (Tribal Reversal, Larynx Shredding, Poe-etry, Refuse Destroyer) and Air Ick (Vocals, Chest Shredder, Jesus Stabber, Guitars, Bass, Demented Art Atrocities) Willow Wisp has forged a fire that burns as bright and serene as a sonic incinerator. Impenetrable survivors who never allowed the deteriorating rue of time to dismantle their vision, Willow Wisp has endured more alienation and ridicule than a band half their age yet at the same time has come to be revered in many underground Metal/Goth contingents as a cult held in high esteem.


Weathering the storms of the 80's Thrash, Glam and Death Rock explosions and the 90's Death Metal and Industrial revolutions Willow Wisp borrowed the most logical elements of them all whilst employing Cinematic sounds, A poetic license to rival Poe and a theatrical stage show best described as classic Kiss and W.A.S.P. in a rumble with GG Allin and Cradle of Filth overlooked by Anton lavey....or something to that extent. Such foreign sights as a Cross with a Brain attached to it (Representing the Death of all religion), Backwards Drumming, A Trash Can Murder Ritual, and Magical and Superstitious props decorating the stage set the group apart from any of their contemporaries.


Along with their infamy has come a vast plethora of rewards including many independent label and self released titles-The Building Up And Breaking Down Of Matter (Pandamonium Records/Germany- 1998), Delusions Of Grandeur (A Gathering Of Heretics) (Fullmoon Productions/Florida- 1999), Continuation Of Deterioration (Self released/2002), Covered In Filth-A Tribute To Cradle Of Filth (Cleopatra Records/2003), Decade Of Violence And Deterioration-DVD (Self released/2005), A Tribute To The Hordes Of Bathory (Blackgoat Productions/Germany-2006), Enmity (Quadrivium Records/Los Angeles- 200?) as yet unreleased.They have also graced the pages of some of the world's most prestigious major magazines/fanzines,books and television shows (Hit Parader, Pit, BW&BK, Metal Maniacs, Gothic Beauty, OUI, Metal Hammer, Nordic Vision, Somber, Keeper, Ill Literature, Throat Culture, Rock Detector's A to Z of Worldwide Black Metal, Jenny Jones,Rolanda) and appeared on various indie film soundtracks such as infamous Canadian filmmaker Alexandre Michaud's Gorefest's 'Urban Flesh' and 'Goregoyles' both done in the style of Italian Horror Master Lucio Fulci. Recently added to their resume was the inclusion on Spain's Maestro of the Macabre Paul Naschy's 2004 American Thriller debut 'Countess Dracula's Orgy Of Blood' that features Willow Wisp on the soundtrack.


2007 arrived like a bad nightmare as the unthinkable transpired and after numerous attempts to simmer a continued mounting of differences in opinion, attitude and agenda co founders Air Ick and Toe Knee sadly parted ways.Nearly 21 years of creating musical aristocracy was halted and a bittersweet rampage of understandable infighting ensued. Camps were divided and soon enough an invisible verbal war was waged between the (old) Willow Wisp faithful, (new) Willow Wisp? armada and those who were/are accepting of the inevitability of change. The situation was a sensitive one indeed. In essence no one knew the reasons for the dismissal except the parties involved and believe me the reasons are well validated.


After all is said and done we wish Air Ick the best and perhaps one day we will make music together again.Fear not though future corpses, (un)tainted blood has been transfused into what was a slowly dying cadaver moist with formaldehyde. It's damaged cell tissue now reinvigorated and rejuvenated.


New Vokillist M6D6M6A (Lung Emanations Brought Forth By Passion & Rage) has infused a fresh sense of being, an exasperating determination that verges on frightening and a truly Satanic point of view. His image is also unique to the strict Wisp code of long hair in that his is sheared short which gives the visual presentation a cryptically militaristic angle, intermingling the classic German expressionism of the 'Cabinet Of Dr Caligari' with the subterranean onslaught of Hammer's 'Plague of the Zombies'.


A Legend amongst men the Keyboard/Sound effects Wizard EYAJO JOSEPH (Keys, Disdained Wordsmith and Poet of Noises, Melancholy And Gloom) formerly of Deathrock stalwarts ''Astrovamps'' is now on board to weave simple yet effective tapestries of darkly woven electronic gestures. He is also adding a subtle touch of surprise with lyrical contributions of a whole different perspective.


The ever faithful Zombie Hermit- IBEX (Sicks String Transmutations From The Netherworld, Samples Of Audio Dread) is prepared to die for the cause continuing an ever increasing song crafting legacy that sees him presenting some of his most diabolically memorable fret burnings to date, not to mention his ghastly conjuration of some of the strangest sound trances known (or rather, unknown) to man (un)kind.


Leader and Drummer Poet of the Damned, TOE KNEE is now manning the eternal ghost galleon through torrid waters, fueling the vessel with the fire it desires and if any heinous fiend is capable of bringing this overtly Demoniacal, Psychologically complex and theatrically inventive unit of mental degenerate geniuses to world prominence it is he.


2008 is shaping up to be the band's busiest thus far. The long awaited release of 'Enmity' on los Angeles' Quadrivium Records is imminent and a new offering of 'Eclectic/Avant Garde/Black/Death/Doom/Thrash/Goth/Punk/Soundtrack Metal' featuring the unearthly decompositions-'Perishable Amongst The Perishing', 'Prisoners Of Technology', '7734999','Supreme Narcissist' ,'I Watched You Drown' and 'Drug' await patiently for fresh virgin ears to deflower. An appearance on Canada's BW&BK Compilation brought offers for a potential Canadian tour and profile/features in Santa Cruz California's 'YourMusicMagazine', Germany's biggest Horror publication 'Virus' and numerous reviews in such luminary cult 'Zines as Cost Rica's 'Call to the Infernal Hordes', Los Angeles' 'Bulldozer' and Romania's 'Blood Swell' not to mention a newly realized stage revamping guaranteed to Entertain, Disgust, Shock and Titillate, summer shows in France and the ongoing siege of rumors, perpetrating naysayers and jealous non-crusading bipeds ensures an exciting existence for all and sundry. DEFY THE MUNDANE!!