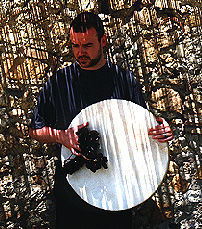 Vidna Obmana (stylized vidnaObmana on many album covers) is a pseudonym used by Belgian composer and ambient musician Dirk Serries. The name Vidna Obmana, a phrase in Serbian, literally translates to "optical illusion" and was chosen by Serries because he felt it accurately described the music. Serries created music under the Vidna Obmana pseudonym from 1984 until 2007, when he official retired the name. Most of his current work is released under the Fear Falls Burning pseudonym.

Vidna Obmana's music has often been described as anamorphic and organic. He uses the techniques of looping and shaping harmonies, minimizing the configurations to a few notes.

Vidna Obmana has collaborated on several occasions with artists such as Asmus Tietchens, Brannan Lane, Capriolo Trifoglio, Diego Borotti, and Steve Roach. Some of these collaborations have become entire projects of their own, such as Continuum (collaboration with Bass Communion) and Principle of Silence (collaboration with Joris De Backer).

Vidna Obmana is often cited as one of the more notable dark ambient musicians.