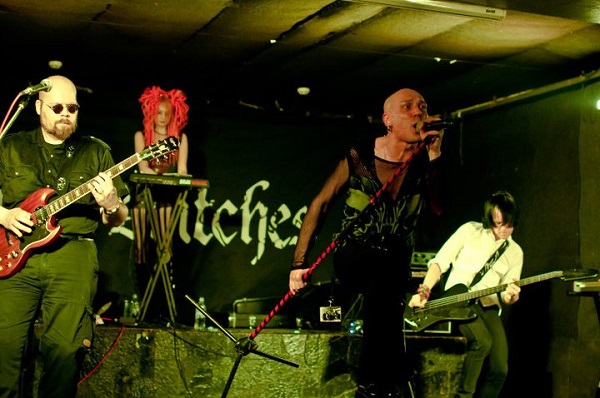 Anne Nurmi & Jyrki Witch started the band called Noidat ('witches' in Finnish) when they realized that there were not any good gothic bands in Finland those days.

Jyrki began to sing in English and at the same time they changed their name to Two Witches. The first gig was in March in their hometown Tampere. The band's first release, 7" single Pimeyden Jousi came out in October from their own label called Darklands Records.

After many different line-up's, Anne & Jyrki finally found Nauku & Toby, another couple which seemed to understand Two Witches - attitude, image and music.
The second and third 7" EPs (Cat's Eyes as a split with Advanced Art and Like Christopher Lee as a split with Russian Love) came out via Darklands Records.

For the whole year there came out only one Two Witches- song in Rare Magazine's sampler, and one song under the name Click!.
In October it was time for the first European tour. The players on the "The witches are burning tour" were : Anne, Jyrki, Nauku, Toby, Ari and Juha. Two Witches were touring in Denmark, Germany and Italy.
In December they were the headliner in the first gothic-festival ever in Finland.

Two Witches debut-cd Agony of the undead vampire, part 2 came out via Darklands, and the band was also included in two compilation releases.
In October Anne, Jyrki, Nauku and Toby went to Germany with their friend TimV. (Shade Factory). It was time for "The undead vampire tour". In the same tour they signed a recording deal with a German label called Talitha Records, a division on Music Research gmbh.
At the end of the year Ari and Timo left the band.

The first German release The Vampire's Kiss- cd came out in September via Talitha Records. Later the same year it was also re-released (with a new lay-out) by Cleopatra Records in USA. At the same time Two Witches guested for two compilation CDs.
The band won the title "The best band of the year" by City Magazine, Finland. In same month came out third Two Witches-cd called Phaeriemagick and the band started another European tour (Finland, Germany, Slovakia) under same name. After the tour Anne left the band and joined a Swiss band Lacrimosa.

1994
Toby guested a German band Love Like Blood for their "European Odyssee" -tour from March to May as their guitarist, and Jyrki toured with another German band Sepulcrum Mentis in July singing Two Witches-songs.
Nauku replaced Anne as a keyboardist. After some line-up changes a new drummer Pave and a new bass-player Linde were found.
Two Witches were included in three compilation CDs for three different countries (England, Germany & USA).
MCD Bloody Kisses was the first release by the new line-up and it came out via Talitha at September.

Jyrki and Nauku guested Sad Parade's debut MCD Immortal Illusions (came out from Jyrki's Darklands Records), after which, due to Toby's work in St. Petersburg, Two Witches took a six months break from touring. Jyrki spent his time in Berlin, playing two gigs with Sepulcrum Mentis.
Bites-CD was released in April by Talitha Records. Two Witches featuring Shade Factory made a cover version of Bauhaus' King volcano which is included in the Cleopatra Records' Bauhaus-tribute called The Passion of Covers (and later re-released for European markets under the name Bela).
The longish touring break ended with a gig for Drum II, an open-air festival in Finland. In August the witches started their "Bites tour '95" consisting fourteen concerts in four different countries (Austria, Finland, Germany, England). They played, for example, as a headliner at the legendary hippodrome in London, as well as in Berlin and Innsbruck.
After the tour the band changed its line-up.
During 1995 Two Witches was included in many compilations, e.g. Mick Mercer's "Gothic Rock II", "What Sweet Music They Make II" and "Gothik".
A German label Vuz Records released a compilation of band's early songs called Into The Darklands - the early years 1987-1989".

Cleopatra Records released the best of Two Witches -compilation called Bites and Kisses. In february Cleopatra Records released the tribute to Bauhaus-CD and Two Witches made their first tour in Lapland.
Iris (who sold merchandise for "Bites tour '95") became a pianist of Two Witches. In September the band was on tour in Finland with two German bands Sepulcrum Mentis and Exedra (both from Berlin).

A busy year for Two Witches. The year started with a tour from Brazil where they got a very favourable reception - all gigs were sold out and the local MTV filmed their Sound Factory-gig.
Late February and early March Two Witches toured in Finland with Midnight Configuration.
The band released a new MCD Talvenaika (back on the Darklands again) and got some very good reviews in various magazines.
Two Witches had their 10 years Jubilee Tour. During the tour they played about twenty gigs in Finland, Germany, Spain and Argentina.

Two Witches started their year by doing a mini-tour in England. They played three gigs with Midnight Configuration.
The tour continued in Finland until the band went to a studio for recording the new album. After the first studio session Nauku and Toby left the band. Their last concert took it's place at Mexas Club, Tampere.
At the end of the year TW played the first time in Athens, Greece.

Wenches, Wytches and Vampyres-CD came out via Cleopatra. Two Witches toured heavily in Finland, same as in Germany, Holland, UK and Sweden.
The band played also in Wave-Gotik-Treffen Leipzig.
Jyrki create an EBM/industrial side-project called SinMasters. This band released their first two MCDs and a bit later a mini-album Seducer.

The debut album Agony of the Undead Vampire pt. 2 re-released by Actcom Music in Finland. The jubilee edition of the album included a new lay-out and some bonuses. The band played in England, Germany and Mexico, and some long tours all over Finland.
Heidi and Marko joined the band.

The new mcd May You Be In Heaven was released early 2002, included a new studio track, a remix by Soil & Eclipse and two live tracks from Mexico City.
The band was planning a new European Tour for April-May, but have to cancel it just before the first concert because of losing the tourbus and all equipments & personal belongings in Copenhagen, Denmark.
Early autumn TW toured in Germany and after the tour the band moved from Finland to Berlin, Germany.
Jyrki was also guesting for NYX's debut album.

Saints & Sinners -doubleCD was released, same as the first Russian editions; The Singles -compilation CD and a re-release of Eternal Passion (with a new lay-out and some bonus tracks).
Two Witches played the first concert in Finland over three years, headlining Lumous Gothic Festival in Tampere.
At the end of the year the band had a short tour in UK with Midnight Configuration and Pro-Jekt.

The first concerts in Russia (St. Petersburg) and Lithuania (Vilnius).
Bites -CD was re-released (with a new lay-out and a bonus video) in Russia via Shadowplay Records.
Anke left the band and Heidi, Jyrki & Marko continued as three-some.

Aleksi (Bloodpit) joined the crew as a new bass player and the band continued the jubilee tour. Also SinMasters toured in Estonia and Finland.