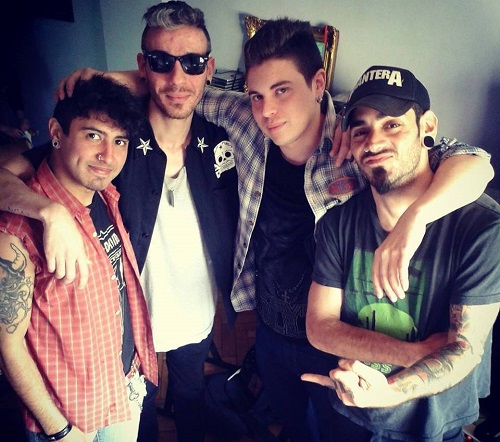 Uniclub: Acid Underground Party on the 2nd floor for a very drawn Halloween was the first show.

2010: Show in. The Funeral (A funeral home where we played really top of a hearse with girls dancing half-naked, while revoleamos crosses and I made one the Brazito john c carlos jesus was then a party of vampires, drugs and prostitutes and orgies.
Then played again at the funeral here is a video of the second time http://www.youtube.com/watch?v=DUzNenUzrec. The power goes out at the end because we had too many amps for the tomb of death.
Other Psy: In a house in the neighborhood of Almagro (Castro Barros and Venezuela played in front of 150 people and the house looked like it was coming down when people jumped ..
Club Cerrito: the show did shit all had at most 30 people were totally destroyed head and the stage and sound.
Hallowen Party: Purpura.

Baghdad Constitucion (Nigel Nolan) where we played in giant paintings inside the walls of a room in the home of a Canadian painter who lives in constitution Nigel Nolan.Luego police came and we had to cut the show missing a complaints theme 10 different neighbors: O
On av cordoba Alliance BAR: with Flood of Tears.
2011: SPECIAL poolside bar: Kunstd.

Transylvania 2014 leaves its first disc: Being well is what queiro do. Mastered by Leo Satragno and graphic design and photography by Adrian Franco Design. Sexual produced by Transylvania.
Edited by Valentino De Transylvania.