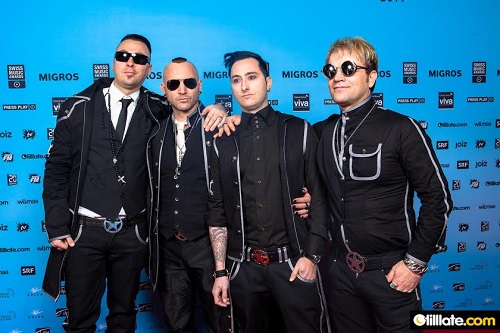 To mark the anniversary, the band sets his own monument in gold.

Petrified is different: A good 10 years, the Swiss exception formation around the two transducer between dream and Gothic Metal, Mikki (vocals) and Rico H (Drums) repeatedly re-imagined. Insinuating Düsterpop oscillates between capriziösem Gothic and shiny chrome metal riffs. Under the auspices of the Berlin star producer "Steve van Velvet" together with Jadro (guitar) and Dee (bass) originated in the legendary "coal cellar Studios" nothing less than the future of the German gothic metal. The bar was with the now exclusively in German eingesungenen work MARIE GOLD set incredibly high that album finished in the first week equal to # 4 of the German DAC charts. Blasted one has already traveling on the stages throughout Europe, was special guest at sizes as the Death Stars, Xandria, Tiamat and Wednesday 13 but also as EU headliner. The luggage had been here so many provocative scene hit like "Who Will Fuck" or "Devil In A Gucci Dress".

The new album GOLD MARIE. In addition to the picture-perfect hybrid of metal and gothic materialized a bride who goes by the name beguiling Marie Gold. But instead of the naive and virtuous girl from fairy tales is Marie Gold metallic Femme Fatale, the Jeanne D'Arc of the Gothic. Time lascivious, submissive, bossy, tender, brutal, ruthless and bloodthirsty she is alive in the pictorial arrangements of musicians. What connects all of the songs, is so rarely encountered the sense of highly infectious ear worms and round melodies that materialize with unexpected twists and arrangements to head an entertaining movie in black-romantic Hollywood style. It is not stingy with sounding quotes: Oscillating, buzzing chorus shreds accompany the sad look on humanity and their desire for self-destruction through war, religion and love. Pictorial soundscapes and frenzied staccato accompany their own movie theater of the last curtain before the end of the individual being.

And again and again awaken the unfortunate and violent revenge of the prophecies of this exceptional artist and front man, the glorified the murder of art in the climax of his obsession. The song "Murder, Art" tops in his pictorial Provokanz even the former anthem "Who wants to fuck, needs to be friendly" and is a video clip of professional representatives Appropriate for a dazzling album.

It is advised the listener to the bus, to set the path as soon as you read on a calendar of events in the car the name STONEMAN and make a pilgrimage to the grand show!