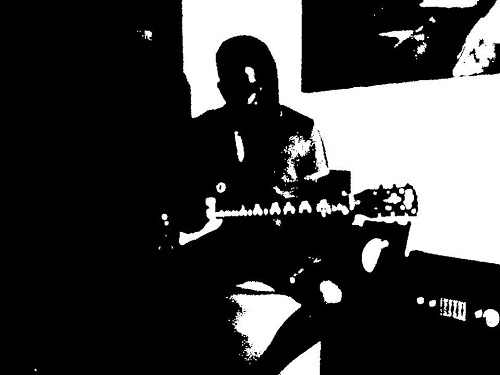 Sonologyst was born in Naples (Italy), in May the 8th, 1971. After studying mathematics and physics at Naples University, he graduated as a sound technician in 1999. In 2000 he started experimenting with electronic mediums, and the result was a 4 track album released as 'Memorie Elettroniche Sonore' (on PeopleSound, a record label sponsored by TDK).

After that he studied guitar and improving his technical skills in the electronic music field, returning to produce music, finalizing many ideas he had in previous years. In end of 2012 and the beginning of 2013 Petroglyph Music netlabel released, under the name Sonologyst, “Ipotesi del continuo”, “Beyond the logic of Science” and “Forgotten Rituals”, the latter a collaboration with polish musician Dariusz Michalak. In 2013 Sirona Records released “The waiting”, an album of solo electric guitar experiments, and Sillage Intemporell publishes a dark industrial album of Sonologyst in collaboration with French experimental musician Adrien Mailler a.k.a. No Way Out . In 2014 Petroglyph Music released Unexplained Sounds album, a work focused on the “uncommon” field recording manipulations, and Geometrical Phenomenons in collaboration again with NOW, where there’s an exploration of generative music solutions.

Various visual works have been based on Sonologyst's tracks by visual artists like Cesar Naves, Alex Amerantropoides, Swoon, and many single compositions were selected for compilations around the world (Midnight Radio, IFAR, Red Venice, Petroglyph Music, Sombre Soniks dark ambient volumes, etc) or for radio streaming shows and underground events.

Sonologyst bases this project on the perpetual experiment in sound, looking back to early experimentation of the Fifties and Sixties of Berio, Stockhausen, Ferrari, Parmegiani, Subotnik explorations, forwarding to the future possibilities of electronic and electro-acoustic instruments, with a special attention to the relationships between music and science, between music and other art forms, including experimental cinema and ancient mythologies. Many of Sonologyst compositions have mathematical concepts, that serves as inspiration. Although this relationship, the structures are not rigid - all pieces are almost completely improvised. That’s why he calls his music “experimental”, meaning that the result is unpredictable.