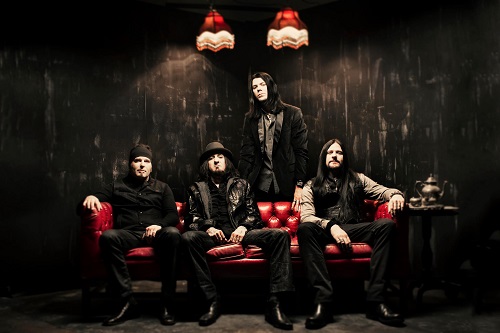 Probably one of the hardest things for an established rock band to do is to replace their lead singer, after all, your front-man is the face of the band, the leader so to speak. And, for the few acts who have successfully accomplished this daunting task (AC/DC, Van Halen, etc.), there are countless others that have failed. Upon hearing Saliva's eighth studio album, Rise Up, you can now add the band to the ‘those who have succeeded’ category. Enter, new singer Bobby Amaru who has mellifluously replaced original singer Josey Scott after his exit in 2012). Bobby has joined up with longtime members Wayne Swinny (lead guitar, rhythm guitar, backing vocals), Dave Novotny (bass, backing vocals), and Paul Crosby (drums). Together, the new line-up has delivered an album that manages to push the band's sound into new areas, as well as retain the group's trademark elements – including Saliva’s signature anthemic choruses and crushing riffs.

“It was through this guy Jeff that we know - a mutual friend”, is how Amaru recalls. First getting in touch with the band. "He used to do lights for the band. He does lights for so many other acts, like Godsmack and Limp Bizkit. But he lives in Jacksonville - he's actually right around the corner from me. And we hungout a lot and stuff, so he just called me up and said that they were looking for a singer and if it was OK to give Paul my number. And that's how that happened."

As evidenced by such standout tracks as the leadoff single/title track from Rise Up, Saliva's reboot has certainly inspired the group, as the new material meets the high standard set by such stadium standards as "Click Click Boom" and "Ladies and Gentlemen." "We made a great record," continues Amaru. "It's like groundhog day, kind of for us with it. Déjà vu. But the writing process I think went back to where the band felt they were at one time. Everyone really had input. It wasn't like, 'Oh, we should do this because of this or that because of that.' I think everybody really got to throw their heart and passion into it." "I'd say that when you're living out on the road, it's kind of hard to write out there," adds Novotny. "You don't get much time alone to do it. But once you finally come off the road and get into the writing mode, you're inspired by everything that happened out there. And we've been out for like two years in a row, just hitting it- being live and being with our fans. Everything just came at once. It all happened really fast. And we think it's the best album we've done since probably the first album.

Another absolute standout from Rise Up is "Lost," which Novotny picks as a personal favorite, as well - "'Lost' is a really good one. The lyrics match the feel of the song really well." And Novotny isn't the only long-time Saliva member to feel that Rise Up will rank ultimately as among the group's best work.

"It was just one of the most enjoyable experiences that I ever had in the music business," gushes Swinny. "And a lot of credit goes to producer Bobby Huff, for creating an environment that was very creatively open and everybody was invited to write. No ideas were shut out - no matter how terrible they were. [Laughs] We explored every idea, and that way, everyone felt a part of the process, and I think it shows in the music and in the energy of the record." Praising the album as a career standout is not to be taken lightly either, as Saliva is a band that has scored numerous radio hits over the years (including such instantly-recognizable tunes as "Always" and "Ladies and Gentleman"), has earned gold and platinum status discs ('Back into Your System' and 'Every Six Seconds,' respectively), and were honored by a Grammy nomination for their track, "Your Disease."