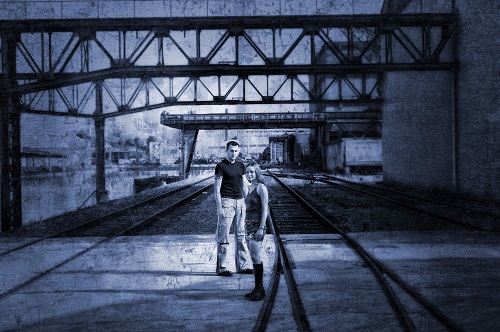 Analog synth basses, atmospheric soundscapes and melodies paired with driving Sequencen, alternating with Arntes "spooky" Flüstervocals or Schmouns enchanting fairies singing - this is what distinguishes the music of pyrrolines. In the tradition of old electro-industrial heroes like Mentallo & the Fixer, Front Line Assembly or Skinny Puppy make living in the Stuttgart region Schmoun and Arnte unerringly exactly the music that they love more than anything. Far common trends and clichés is always just the music, the groove, the feel and the atmosphere in the center of the work of the two actors. Since 2005 Schmoun and Arnte are a couple make together since the music. Initially under the project name was changed in NORTH BATTLE pyrrolines with the release of their second album "Behind the Horizon" is the name.

The case "Klangdynamik Records" published 2008 debut album "Silence, Beauty and Cruelty" was enthusiastically applauded by many critics. The first concerts were very well received. Things were going the Splitgig with Jihad on the 3rd Aliens Production Night near Bratislava in May 2009 and the concert with Leaether Strip in Ludwigsburg in January of 2010.

In December 2010, on their own their second album "Behind The Horizon" which further led to the timeless sound of the debut album consistently but with a little more EBM influences were heard. This album was able to carry on from the success of the previous album.

Although the self-promotion so fully opened up pyrrolines sought the release of the third album again a label. And so is the new album, which bears the name "Ruins Outlast" vorraussichtlich published on the Canadian label "Electro Aggression Records" in spring 2013....