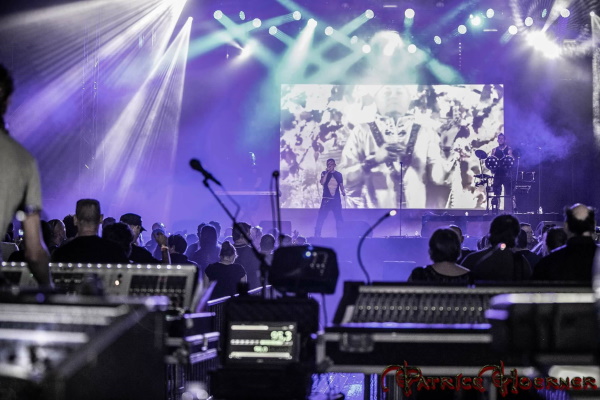 Flemish-based Pro Patria was founded in 1988 by keyboard virtuoso Peter Vercauteren (aka PVC) with the aim to create a middle road between commercial mainstream and alternative, electronic music. Assisted by Pierre Fonteyne and later by Bert Depuydt, the band quickly evolved into a darker EBM style and released their first demos in 1991. Encouraged by positive feedback, a first studio album, "Spasmaticae", was released on cassette tape in 1993, followed by five-track "Militaria" in 1994 and a live tape "Veni Vidi Vici" one year later. In 1996 Pro Patria signed with German Celtic Circle Records and out of this collaboration arose the full cd "Quod Erat Demonstrandum" and the ensuing "Hard Times" maxi. The album, skillfully produced by Marc Schellekens, became a compilation of ten years of Pro Patria during which the band had developed its own distinctive sound, characterised by complex layers and a myriad of different voices. The lyrics advocated a healthy mind in a healthy body and a strong aversion towards fascism and religion. Unfortunately, C.C. faced bankruptcy when the cds were about to be released and Pro Patria remained empty-handed. Attempts to have "Quod Erat Demonstrandum" released through other labels failed because the music was either deemed not dark enough or not techno enough. In 1998 Peter and Bert split due to artistic disagreements and David Vallée (Lith, E.K.S. Center) took the latter's place for the ensuing gigs, the last of which was in 2002. In the meantime, Peter's personal situation had changed much for the worse, undermining his motivation, and Pro Patria became forgotten.

In 2007 Peter was asked to participate in the Old School Electrology project, a grand compilation of old and new Electro/EBM bands. Although feeling extremely honoured, he was not in a position anymore that allowed him to invest in his music. He eventually came up with a demo of his unpublished 1997 song "H2SO4 - Pray for Salvation", but felt very disappointed about it.

Ten years later, whilst assuming that Pro Patria had long been dead and buried, Peter was surprised to receive an invitation to play at the Familientreffen EBM festival near Leipzig, Germany, sharing the stage with top acts such as Leaether Strip. The concert was a success and being again surrounded by people who believed in Pro Patria, Peter dived back into the studio to produce a new album "Back to Basics", exactly 20 years after "Quod Erat Demonstrandum". The challenge was none of the least after such a long inactivity. For this reason Peter went back to his roots (“Back to Basics”), to the era in which he had developed the real Pro Patria sound and he wondered how Pro Patria would have evolved if the band had continued to exist over the last 20 years. Building on the same, somewhat bombastic concept, the sound became harsher, more direct. Even though the old themes are still present, concern about the environment, overpopulation and a world dominated by social media also set the tone. Surprisingly, or perhaps not, “Back to Basics” has turned out to be a much more personal album, largely inspired by the extremely dark period Peter had to go through.