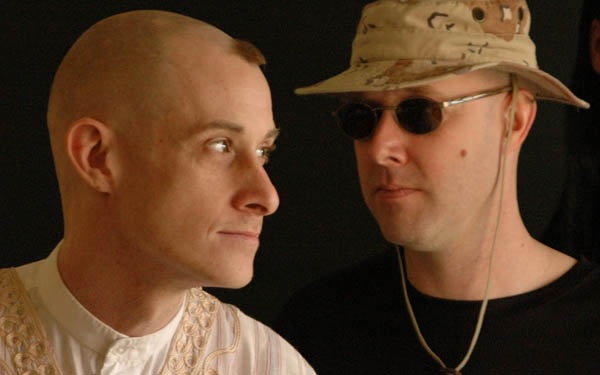 Mentallo And The Fixer was formed by Gary Dassing (Mentallo) and Dwayne Dassing (The Fixer). The brothers started experimenting with music utilizing more traditional Rock music instruments. Their first band Benestrophe was created with vocalist Richard Mendez, and they replaced their guitars and drums for synthesizers and samplers. The two albums (Sensory Deprivation and Auric Fires) were released through the US label, RAS DVA Records. After these releases they Dassing brothers parted ways with Mendez and started a new direction with their own creation, Mentallo And The Fixer.

Their first album, No Rest For The Wicked, was a limited 500 pressing on vinyl through the Portuguese label, Simbiose Records. The albums garnered them a lot of attention in the music world, including Talla 2XLC of Zoth Ommog Records. It was at this point that they forged a long-term relationship with the US based label, Metropolis Records.

The second album, Revolutions 23 showed an aspect in their music that was gravitating to Electro-Industrial music. Between this album and their third album, Where Angels Fear To Tread, they showed a style of music that harnessed the original standard of Electro-Industrial, but with their own style. It was this combination that inspired many of the future musicians and has made their albums to this point considered to be some of the foundation stones to what Electro-Industrial, Industrial, and Experimental music is today.

From 1994 to 1999, the Dassing brothers would release their next album, Burnt Beyond Recognition, and two singles, Centuries and False Prophets. They would also develop a side-project with Michael Greene at vocals called Mainesthal. This side project would have two releases, one was where their main project and their side-project were joined for one release.

After four years being on the back burner, Gary released a 3 CD box set titled, Zothera, on Alfa Matrix Records. It contained two remastered albums from the Zoth Ommog days and a third CD, Apocrypha, that contained unreleased material such as remixes.