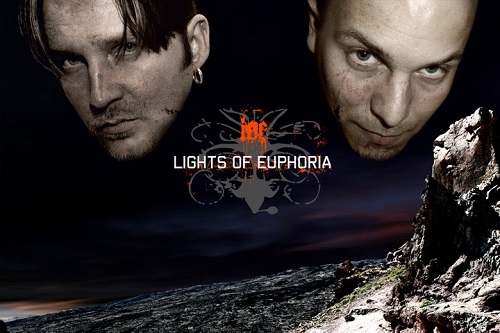 This is the true story

After the release of "Subjection" (feat. Claus Larsen of LeætherStrip on vocals) on the famous Zoth Ommog compilation Body Rapture, LOE started to become a "real band" after the release of the first album "Brainstorm" (Zoth Ommog, followed by "Beyond Subconsciousness", "Fahrenheit", "Voices" and the single "Fortuneteller") Jimmy Machon and Torben Schmidt teamed up "by accident" to produce some further music and touring all around the globe. While LOE in the beginning was more a sort of a project and "one hit wonder", working with various guest vocalists such as Ronan Harris (VNV), Stephan Groth (APB), Vasi Vallis (Frozen Plasma/Reaper) Johan van Roy (Suicide Commando), Kay Härtle (Supreme Court) and various other good friends, mastermind Torben Schmidt decided to bring it down to a more band orientated way of working.

So from today we..re proud to announce a real band line up with Jimmy Machon (vocals, machines, production), Torben Schmidt (machines, programming, production), and the helping production work of Vasi Vallis (Reaper/Frozen Plasma, on the last album single). Also Jimmy became a driving force in the production process so he..s now also integrated in doing music, production and artwork designs with a great helping hand of our favourite "pixelman" USER.DX. A new labeldeal with Accession Records after the going down of Zoth Ommog) brought us the platform to release our music and after the successfull release of the single "True Life" we managed to put out a variety of cool CD tunes for you, the fans, such as "One Nation" (MCD), "Krieg gegen die Maschinen (CD Ltd. CD), "Fading Moments" (EP CD), "Gegen den Strom" (CD Ltd. Edition), "Querschnitt" (CD, Best of) and the current limited single "Sleepwalk" (MCD).

Also touring became very important to us so we visited Germany, Denmark, Sweden, Greece, Norway, Austria, Spain (with more to come...) and actually became a way more professional live unit then in the early days. Kevin Markdan (live drums) are no longer a member of LOE, and will not join us Live.

It is now some years since we released Sleepwalk the EP, what was intended as a prerelease to the new album "Landscape", but personal reasons made everything stand still, Both Torben and Jimmy are now fathers and have spend the time on family and other work, so the "Landscape" album has never been finished. As of May 2010, Lights of Euphoria has a few new tracks finished and are working in the studios to Finnish more songs for an upcoming album, It is not certain that the name for the album will be "Landscape" only time will tell. Well things changed, and many things happened, Jimmy became a father, Torben was touring a lot with "Suicide Commando", and working on getting "Infacted recordings" to state it is today. So LOE lay low for a while. Finally they have released "Schwarze Sonne" the first in a series of EP's latest release is a pure online release, a cover version of Depeche Mode's "Stripped". Search Youtube and you will find.