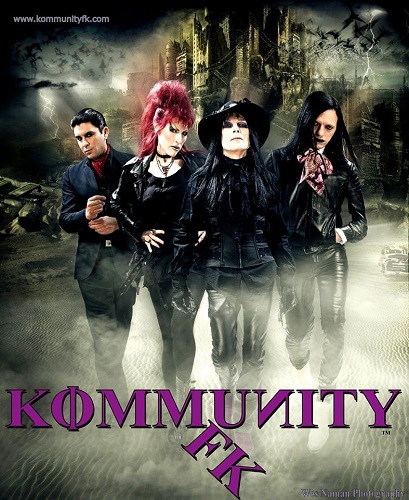 Kommunity FK was created by Patrik Mata in 1978 in the midst of the LA punk explosion.

Unknowingly, Patrik's new musical genre became a cross between post punk against a darker gloom that became the genesis of American alterative/gothic/deathrock. Mata's style of creating original pieces reaches far into several genres of music with the classification of "Alternative Music" as the structured sound of Kommunity FK.

Kommunity FK's beginnings were raw. Mata's influences of William S. Burroughs, Jean Cocteau, Salvador Dali, and early Bowie were woven through a dreamy musical side combined with experimental synthesized art punk. Mata's visionary soundscapes were all his own.

The original pronunciation of Mata's new creation was "Kommunity Fuck".

Very daring for the time when the later part of the band name was the top word of what was then known as the FCC's 'seven words not to be uttered' list.

Changed by Mata to "Kommunity FK" so promoters back in the day had no problem placing the headliners name on their marquees.

The FK has stuck throughout the decades ever since the bands live performance inception.

Patrik Mata, now fully armed with his own recording studio (Vision & The Voice Studios) where Mata has continued Kommunity FK as a ground breaker within the world of music.

Mata not only records new Kommunity FK pieces and remixes at the Vision & The Voice Studios daily, but also works for clientele such as movie sound tracks and other artist material.

Mata also DJs for numerous clubs including the first reopening of the Los Angeles based "Bat Cave".

Kommunity FK performs internationally and records new material in the same tradition as they always have since 1978-as an original forerunner of Alternative music.