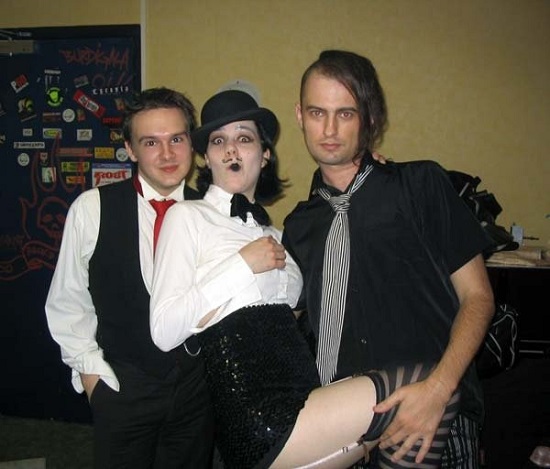 The Katzenjammer Kabarett used to refer themselves as Death rock Cabaret, but it would be more correct to qualify their music as multireferential post-punk, for their influences can be found in too many styles, from glamrock to electroclash, from baroque music to new-wave, merely to limit this band to death rock or more widely to Gothic music.

The name Katzenjammer Kabarett is just a name, there is no point in looking further even though we must admit that the Katzenjammer Kabarett members do not mind using the diletante and frivolous aesthetic of several past movements, their compositions, nonetheless, by the means of varied and various collages, is an attempt to reveal in a coherent or almost way, by the use of electronic, pop, jazz, deathrock, or classical music sounds as well as traditional cabaret songs, the peculiar atmosphere one could have probably found in old fashioned Lieder.

To sum up, a considerable part of their work comes from second-hand elements, borrowed from several preceding movements and styles, but whose signs have been systematically changed. Thus, the music composed by Klischee, supported by Herr Katz’s lyrics and Mr Guillotine’s how so necessary pragmatism, creates an alchemy with the carefree Mary Komplikated’s voice and theatrical singing which embodies all the magic, the cynism and the absurdity of that hangover cabaret.