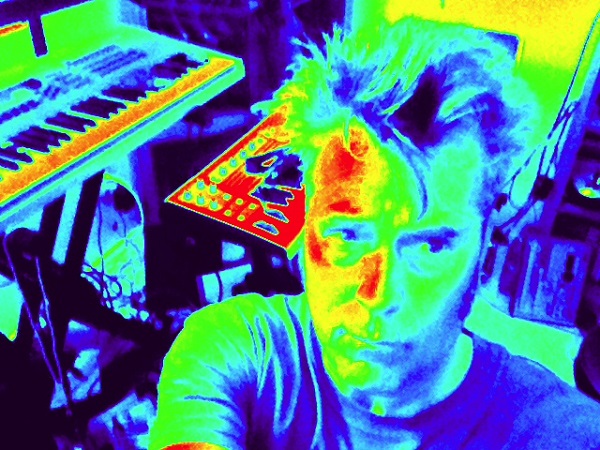 Kalter Trost is an Electronic band based in Tucson Arizona. The name means Cold Comfort in German. German bands have probably influenced us more than anybody, so it is out of deepest respect for The land of music we choose a German name! Charles (Chuck) Den-Baars is the founding member with a long history in Electronic music going way back to 1981 when he made his first Electronic recordings with the project "Young Science" Other projects were "Psycho-Bunnies" "Psycho-Beat" "Brash" and "Galusha" Staying in the underground in the Tucson music scene for well over 20 years was the only option, since there still is a huge animosity and very little opportunity for this type of music! Yes, we have had bottles and insults and even threats, hurled at us onstage, but we have persevered and carried on cause we believe in his kind of music, and never thought of selling out and changing our style of music just to get acceptance! Aaron Hess, Danny Koester, Adria Elliot have done vocals back when the band was previously known as Galusha.

We have a style that has elements of Industrial, Electro, Synth-pop, E.B.M. Gothic, and a touch of I.D.M. And we try to be very danceble, but try not to follow the current trend of copy-cat bands, who jump on the latest sound bandwagon! Science-Fiction and Futurisic themes figure big in our lyrics and song direction. Yet we also have a big influence of old-school Industrial from the late 80's and early 90's when originality was more appreciated than nowadays! Pioneers like Gary Numan, Kraftwerk, Fad Gadget, Ultravox, Cabaret Voltaire, John Foxx, Nitzer Ebb, D.A.F. Front 242, Front Line Assembly, Laibach, the Klinik, Skinny Puppy, Borghesia, A Split Second, Neon Judgement, and Suicide Commando are very big influences on us! Chuck's influences even go back to the 70's and even 60's with bands like The Who, Pink Floyd, Bowie, Alice Cooper, The Sensational Alex Harvey Band and Budgie! Chuck has opened up for bands such as XORCIST, Mankind is Obsolete, Otto's Daughter, Crash Worship, and Electrasturmschnell. We are almost entirely synthesizer-based, no guitars, bass, or live drums, except occasionally or maybe sampled... A 16 song self-released cd is finally now completed and for sale.