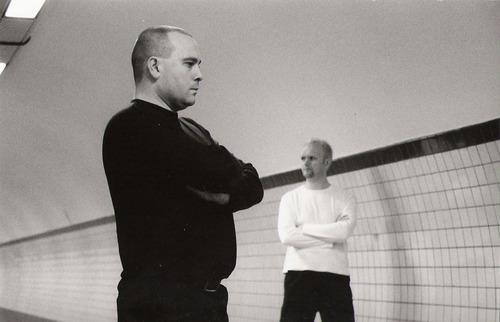 While enjoying a diversity of electronic tunes of which Nitzer Ebb, Depeche Mode and Kraftwerk are their main influences, Sven Lauwers and Andy De Decker , decided in 1992 it was time to start making themselves what they had been listening too. Ionic Vision was born and after a set of tape releases, mostly with either odd designs, strange formats (12inch tape) or tapes accompanied by booklets, the release of a 3 track VHS, cdr?s, the trio signed in 1996 to the German cult label Khazad-Dhum (Sub-division of Celtic Circle Productions) taking them up to a higher level.

This signing saw the release of their debut cd Rage Against the Acoustic (ION002), up to date one of their most sought after and appreciated release. Their everlasting statement Rage Against The Acoustic, made it clear to the public that Ionic Vision was not aiming at any or thé commercial movement of that time, cross-over. For years to come Ionic Vision struggled hard to keep the true EBM spirit alive, a spirit highly lost interest at that period !

Right before the decline of CCP/Khazad Dhum and after setting up their own recording area, the Ionic Data Base, a mysterious haze seemed to cover the band. No interviews, no compilation appearances, no live performances,? Tongues claimed the band had split up, moved on to put their unstoppable energy in new projects ! During that period Ionic Vision did remix a plethora of artists and even helped some bands who knocked their door asking them for help recording their first demo. All that made it look as if Ionic Vision didn't have much time left for themselves which in the end lead to a band crisis and slowly all they had build up started to fade.

But Andy and Sven struck back together with the well appraised US label DSBP. A special US only compilation CD called Homo Sovieticus (ION004) and a remix CD MaschinenAngst (ION005) which was a surprise to many due to its versatile content did put Ionic Vision back on track.

Hardly getting any respect for being at the front of the upcoming new boom of EBM bands, Ionic Vision made another weird decision and released an EP and a 12inch vinyl called "In Between (ION007)". Never tried before by the band they were remixed by Techno masters Terence Fixmer (today better known in the EBM scene for his work with Nitzer Ebb's Douglas Mccarthy) and Thomas P Heckmann. All this boosted them, not only out of the narrow EBM scene, but also straight into a more club-orientated direction, highlighting their versatile style of EBM. After this amazing follow-up by DJs, mags and clubs, the threesome worked hard to raise the respect, improving the standards they did set with their come-back.

End 2005 they released the praised full-CD Actual (ION009). With mixed comments, some critics did quote it as 'going back to the roots, hard-core', others quoted that this release pushed the standards for other current EBM bands really high, maybe even too high, that the album reached the top of what is possible with this music, the perfect combination between the old roots with the modern technical possibilities of today?

Returning in 2008 with an even more rock-solid belief that EBM is more than the 4/4 thumping beat and bass sequence, Ionic Vision raised their high quality standards again! With this time an even more impressive list of collaborating artist they revealed the result of what they did announce as The Isolated Sessions. With the aid of artists like Orange Sector, David Carretta, DJ Stamba and even more The Horrorist (Oliver Chesler), Mute records act Komputer, Ionic Vision released no less than a club EP, 2 full CD?s (US and European version), two special download only EsP, a 12inch club vinyl, two special fan club releases, the re-release in digital format of their first three releases and to complete it all a remix album

In 2010, Ionic Vision received the honour of being the live opening-act of their biggest example in history, Nitzer Ebb!

The name Ionic Vision and Nitzer Ebb finally met on a poster and on stage, after nearly 20 years of existence. It gave the Belgian EBM heads a new impulse, resulting in their fifth studio album already planned for 2010.

Under the cover of the so-called "Happy Sessions", Ionic Vision this time opens all registers and all their musical influences are clearly invading their new songs. Next to the regular hard hitting EBM, the upcoming tracks are also heavily influenced by 80s new wave tracks or darker dance music. The "Happy Sessions" combines all the best from the Ionic worlds.