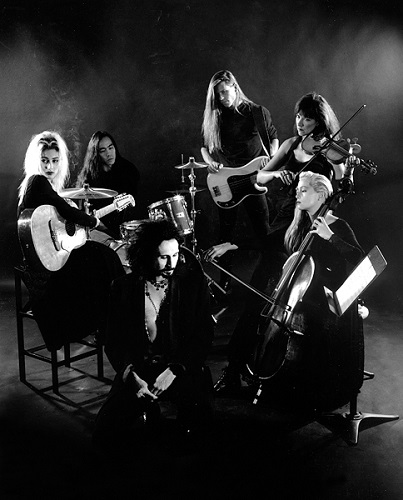 One of the longest-lived American underground bands, Human Drama was in many ways the personal vehicle for singer/songwriter Johnny Indovina who guided the band through a variety of lineup changes and stylistic experiments. During their lifespan, Indovina and Human Drama released a series of inspired recordings and thrilled audiences with their powerful, moving live performances, all built around Indovina's passionate singing and dramatic melodies. Supported by a devoted fan base in America and most notably Mexico, Indovina and Human Drama created a wonderfully intense and heartfelt collection of work that will be enjoyed and discussed for years.

Indovina and Human Drama began their career in New Orleans in the early 80s as the Models, releasing two singles along with compilation appearances. A mid-'80s move to Los Angeles and the discovery of an Australian band named the Models set the stage for Indovina and company to begin their new incarnation. The newly renamed Human Drama became a vital member of the legendary "Scream scene" of the mid-'80s, which sprang up around the short-lived Los Angeles underground goth metal club that brought Guns N' Roses and Jane's Addiction to the world. Human Drama contributed a song, "Wave of Darkness", to the 1987 Scream Compilation LP, which led to a major label deal with RCA. 1989 saw the release of the debut Hopes Prayers Dreams Heart Soul Mind Love Life Death EP (recorded in Wales, produced by Ian Broudie - Echo And The Bunnymen, The Fall, Lightning Seeds), and the full length Feel LP. Indovina soon concluded that RCA wasn't properly promoting the band, and made the move to the influential independent Triple X Records label.

The next major Human Drama release was their masterpiece, 1992's The World Inside, widely regarded as Indovina and Human Drama's most important work. Both exhilarating and insightful, the LP earned the band critical raves and a near fanatical following. Interestingly, a solo performance of various cover songs by Indovina at the album's release party inadvertently predicted the next Human Drama album — 1993's Pin-Ups, an open tribute to David Bowie's album of the same name, a collection of remakes of various sources of inspiration. A move to New York city accompanied a temporary co-release stint on the noted Projekt label, resulting in two additional mid-decade releases — 1994's Human Drama EP, especially noted for its reworking of Feel's epic "The Waiting Hour", and 1995's Songs of Betrayal, an extended meditation on the theme which was later re-released as two separate discs with additional tracks.

Having built up a sterling live reputation, it wasn't surprising that the next Human Drama release would be a live album. 1997's excellent 14,384 Days Later featured many of the early Feel-era songs, along with some fine new cover song choices. 1999 brought Solemn Sun Setting, further polishing the band's status before the following year's career overview, Best of Human Drama...In a Perfect World. In 2001, Mexico's Noise Kontrol Records released Momento's en el Tiempo (Moments In Time), a live compilation of Indovina's solo acoustic performances where classic Human Drama songs like "Death Of An Angel", "Tired" and "This Tangled Web" retain their power in the stripped down acoustic format.

The final Human Drama album, 2002's Cause And Effect, was an unexpected goodbye from Indovina and company. With Indovina's thoughtful lyrics and his warm, beautiful voice again in fine form, he moved even farther away from any limiting goth rock tag to a more unique stylistic hybrid.

In 2004, Human Drama recorded their final track, the Beatles "Let It Be", which was given to fans who attended the band's farewell performance in Los Angeles. When asked why he chose "Let It Be" as their final recording Indovina answered, "I strived my entire career to write a song as good as that, but since I couldn't, I decided to record it as a salute to what is in my opinion, the best song ever written".