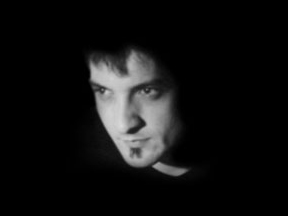 Established trademark in today's electronic music scene, Belgium’s Alfa Matrix record company has also always shown a large part of eclecticism in the selection of the artists signed to the label... Well, HALO IN REVERSE is living proof of this and above all a very promising surprise for the new year. HALO IN REVERSE confirms that there is still talent around to be discovered and that electronic music can still be more than the average boom boom club noise of today.

Drawing from influences as diverse as DEPECHE MODE, Peter Gabriel, MINISTRY or yet Rob Zombie, it is with NINE INCH NAILS’ early and more aggressive days that HALO IN REVERSE’s music is the most easily compared to. If obviously following the direction brought by Trent Reznor, Joshua Steffen is definitely doing his own thing, combining emotional melodies with caustic synthesizer and guitar textures, mixing the organic with the synthetic in a mélange that is as enticing as it is aggravating. His most striking and dominant own characteristic of all being no doubt Joshua’s passionate and intoxicating voice: strong, decadent, artfully lustrous and dreamy.

On his forthcoming debut release for Alfa Matrix, HALO IN REVERSE presents the ultimate display of an artist taking his powers to his utmost, focusing on musicianship and solid songwriting resulting in both great music and strong lyrics. An album revealing an awesome production work and a degree of musicianship seldom seen around these parts, on which the music just flows and influences combine fluidly. An album filled with emotion and the pain that only love can bring us when it is no longer returned.