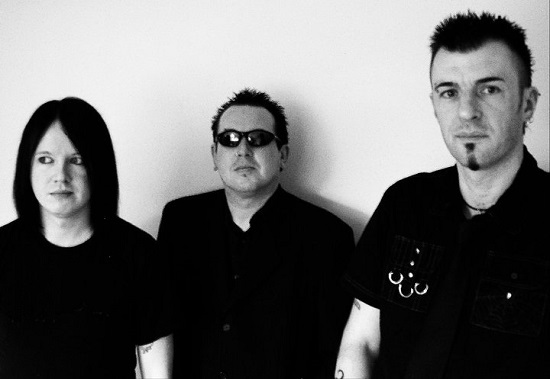 Grooving in Green formed in 2008 when guitarists Pete and Simon Manning started writing music together for the first time in over 14 years. As a nod to the bands origins and inspirations they once again took their name from a March Violets song. Later that year Tron joined on vocals completing the lineup.

In early 2009 the band set to writing their debut CD, quickly establishing their own sound and feel – ‘Groove Goth’.

In June the band received critical acclaim for their first EP ‘Ascent’ which was described as “Obvious Quality” (Mick Mercer) and proved to be a hit on compilations and in clubs.

The band proceeded with the ‘Ascent Tour’ to promote this release drawing comparisons to band such as Placebo and the Manic Street Preachers. During this time the band began working on a follow up to Ascent. The band played their first European date at the Judgement Day festival in Austria debuting songs from the new single, supporting Ikon and met with a great response. The band soon went on to play the Whitby Goth Weekend Festival supporting The Eden House to an enthusiastic crowd and officially released their second cd: ‘Dirt’ which was once again met with positive reviews and praise ending the year on a high.

By the start of 2010, the band were putting the finishing touches on their debut album and played their first gigs in Germany in support of the House of Usher as well as Clan of Xymox- once again to a positive crowd. Within the week the band were once again recording- with Steve Carey (Eden House/Adoration/This Burning Effigy) producing as well as Legendary bassist Tony Pettit (Fields of the Nephilim/NFD/Eden House) contributing on a song and mastering by Andy Jackson (engineer for Pink Floyd).

That summer the band headlined the first night of the Lumous Gothic Festival in Finland and later the same month proceeded to play in support of Vendemmian and The Eden House once again at the first DV8 Festival in York where they were joined on stage by legendary March Violets vocalist Rosie Lugosi. This performance being described by Dominion Magazine as follows “Grooving In Green deliver a punky yet polished performance – superbly guitar led with strongly delivered vocals”.

With the debut album ready for release the band returned to Whitby once again for ‘DV8fest at Whitby’ where they supported their idols ‘March Violets’ alongside O Children and Ulterior. The band released the album ‘Post Traumatic Stress’ which received great acclaim within the Goth community and cited as one of the best goth albums of 2010. Legendary independent music reviewer Mick Mercer described it as “A cool collection, with plenty of musically combustible uppity carousing you can’t fail to enjoy”. The album was placed at number 15 of Dominion Magazines Top 20 albums of 2010 and has been placed in several Top 20′s of 2010 and continues to receive positive reviews.

n 2011, the band played dates in the UK both to promote the acclaimed debut album and to introduce new material for the second album. In August 2011 the band had the honour of being declared Static Magazine Germany’s ‘band of the month’. In the same month the band headlined the first night of Norway’s HELLDORADO Festival. The band finished the year by returning to Germany in October to play Area 51 once again with Vendemmian.

2012 started with the band playing on the birthday of Copenhagen’s Black Cat club to an enthusiastic audience in February before playing a well received show in Leeds in March. The band recorded their second album Stranglehold between May and June once again with Steve Carey with Andy Jackson once again handling mastering duties.

In June, the band also took time to fit in a return to the Slimelight in London with Andi Sex Gang and followed this up by visiting Malmo, Sweden to play with good friends Kindred Spirits.

In October of 2012, Grooving in Green returned to Germany to play Area 51 in Hilden and their first date in Liepzig at the popular Vanity Noir club in order to launch the new album.

On November 15th Grooving in Green released their second album on cd through AF Music with positive reviews across the board: Mick Mercer said, “‘Post Traumatic Stress’ was an excellent debut album. This is even better.”

Billyphobia.com said, “Extremely infectious underground music made of energy-giving and harsh sounds that focuses on straightforward forcefulness to groove in goth” and Graveconcernsezine.com said, “This record is the cookie-cutter example of a great, and grooving goth rock album.”

n December of 2012 Simon Manning announced that he would be leaving Grooving in Green due to issues of distance and dedicating more time to his personal life.

In 2013 the band were very happy to welcome new guitarist Joffie Lovett into their ranks. Joffie joined the band in playing Austria’s Emergency Exit Festival headlining it’s second night on Easter Sunday of that year – with Joffie making a scorching debut.

The album Stranglehold also continued to receive many positive reviews with the album topping the European Alternative Charts for two weeks consecutively. In May of 2013 Grooving in Green went on hiatus so the band could relocate and begin working on material for their third album.

As of 2014 Grooving in Green are now expanding their line up to include a soon to be announced bassist and drummer to give the band a stronger, more organic live sound. The band aims to announce new members, tour dates and details of a new album soon…