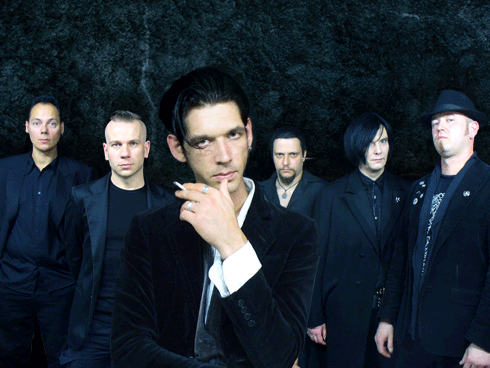 Since it was given birth back in 1998 the GOLDEN APES has been known as a shimmering gem in the independent wave- and gothic-scene. It is the difficulty of a rigid definition und their versatility, that provides the band a status stamped by requirement and content, making them an important constant within the musical landscape, that lies beyond the common mainstream.

From the band name, borrowed from the writings of Friedrich Nietzsche, through to the powerful picture language and surrealistic items, which are basics of the bands oeuvre, conducted by Peer Lebrecht´s poetic lyrics, which are thematically on a restless scout among melancholy and mystic, emotion and philosophy, sustained by catchy but complex arrangements, which avoid to bow to borders and conventions for keeping a emotional depth between melody and emotion, between roughness and longing You can discover every listening in a different new way.

The band has always admitted itself to the significant artists of the scene the members grew up with, but without pointing out someone especial-you will find those moments from time to time listening carefully to the music. Coincidentally by publishing “Denying The Towers Our Words Are Falling From …” at the latest as their current full length album, GOLDEN APES in some ways found themselves emancipated from these influences, but only to create an individual, distinctive own style within that universe.

There are six full-length albums published until now, which show a continuous and passionate development in GOLDEN APES’ work and if you spend some time to engage yourself in the lyrics and the whole band’s cosmos, you’ll find what has ever made the GOLDEN APES unique: a depth and richness of detail, that lets you space for dreaming and inspiration for your own thinking. In this respect, the band not only musically, but also aesthetically and intellectually assigns their individual position in the scene.