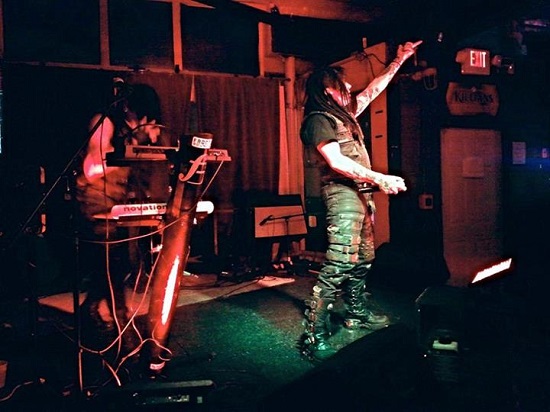 Frontal Boundary started as the solo project of BrendinR. His music mixes EDM, synth-pop and EBM enveloping a wide array of vocals, melodic leads, and hard beats. Frontal Boundary just wrapped up playing God Module's Empath 2.0 tour in March 2013. They've also secured a spot at Montreal's Kinetik Festival 5.5 in May 2013. Electronic Warfare V.2, the official release of the reworked self released demo was released February 27, 2013 on Beyond Therapy Records.

Created in 2002, the Frontal Boundary project was almost immediately placed on the back-burner for BrendinR as he dealt with personal matters. It would take 6 years before he could revisit the project. 2008 saw the release of the demo Never Ending, a purely instrumental album. A year later, the track Mindfuck was released on the Genetic Defekt Census compilation. In 2009 BrendinR was forced to relegate Frontal Boundary to the back-burner for another three years. Frontal Boundary's next album, Electronic Warfare, was released in January 2012. This album features tracks that narrate BrendinR's life experiences endured during his absence from Frontal Boundary. BrendinR has described his music as, "Thoughts come together to form ideas. Years of heartache, depression, betrayal, love, animosity, passion, the good times and the bad… All accumulate into one thing: sound. Music comes from the fingertips of emotion, a roller coaster of life." Electronic Warfare is the aural testament to the theory of music and sound which embodies the Frontal Boundary ethos.

Since 2012, Frontal Boundary has achieved a meteoric rise in success within the Industrial/EBM community. Frontal Boundary has released numerous remixes of many artists within the scene, including Panic Lift, Bruderschaft, and Trakktor. Die Sektor commented in regards to a remix request from Frontal Boundary, "Most remix requests we get for independent releases are from not-quite-there type bands. Your song, however, is definitely ‘there’. When I played it in my car on my iPod I was ready to cringe. However, I ended up saying ‘wow’ instead!"

Several magazines have printed positive reviews of Frontal Boundary's albums. Coma Music Magazine wrote, "I think Frontal Boundary has tons of potential and I have high hopes for their first full-length album." Brutal Resonance, an online web portal for EMB/Industrial music published a promising critique of Frontal Boundary on their website, "For being his only album release, I can see a lot of potential in this artist. Along with the video for Mental Illusion, I am sure this won't be the last we hear of from BrendinR (Frontal Boundary), and he is sure to start getting attention and gaining devoted fans. I can only see his next albums getting better and better."

What does the future hold for Brendin R and Frontal Boundary? Given their meteoric rise, it’s certain that Frontal Boundary will be busy for some time to come. The re-release of Electronic Warfare V.2 came out February 27, 2013, followed directly by going on tour with God Module, a performance at the Kinetik Festival, playing with Suicide Commando on their only U.S. date of 2013 followed by touring with Die Sektor.