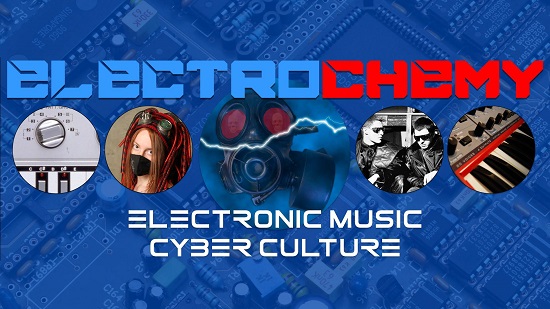 Al McDonald came up with “ELECTROCHEMY” one day after watching the remake of ‘The Day The Earth Stood Still’ with Keanu Reeves (he’s a big Sci-Fi fan). “Electro” pertaining to all things Electronic music and “Chemy” for the way music (and media in general) can have an effect on the chemical changes in the human body! Listening to music can produce Dopamine and possibly Adrenaline – with aggressive, hard and harsh music that Electronic music can sometimes produce. ELECTROCHEMY was born July 2013.

In a nutshell ELECTROCHEMY TV came out of the ashes of ‘Blip-Bop’ – a very successful PDF and interactive PDF magazine that were available online. Unfortunately, Al lost the domain name ‘Blip Bop dot com’ (through no fault of his own); as it turned out taking a rest was vital to his health. Who knows what would have happened if Al had gone to that one last gig for the month? At first ELECTROCHEMY took on the same PDF and interactive PDF formats; inevitably producing 200-odd pages on his own would take its toll, again, on the Al we know and love. So, Al decided to turn ELECTROCHEMY into a YouTube magazine and channel. Al managed to produce 3 YouTube programs before personal tragedy struck. It took Al 2 years to recover and return to producing ELECTROCHEMY TV.

Today Al works with a handful of people helping him to produce content and to publicise the ELECTROCHEMY TV YouTube channel and website.
Things are looking up! The best has gotten better and will continue to do so…Thanks for being there!