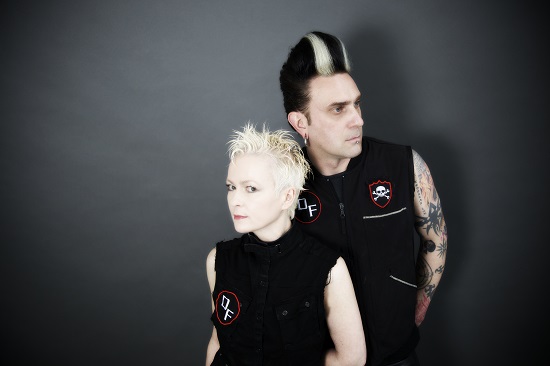 Decoded Feedback burst onto the industrial scene in the mid-late 1990s. This creative duo brought together all the elements and contrasts that exist between the sexes, and at the same time using their diverse backgrounds, European and Canadian, to successfully create their own unique sound. In the beginning, their goal was to combine the spirit of punk with the cold perfection of electronic music, but as time went on, their sound developed more into the dark electro-industrial sound they embrace today. Their aggressive blend of dark melodies and harsh bass lines has proven to be a powerful combination.


Their CD Shockwave had the honour of being voted #3 Top International Album of 2003 on the Deutsch Alternative Charts. After releasing numerous CDs, touring Europe and North America, they continue to redefine their sound and explore new musical horizons. After a personal hiatus and a European label change, Decoded Feedback returned to the studio working harder than ever to release their album Aftermath on Metropolis Records and Dependent Records in May 2010. Not only did Aftermath reach #2 on the DAC (Deutsche Alternative Charts), it was touted as one of the best albums of 2010. disKonnekt, the latest release from electro-industrial masters Decoded Feedback, explores the themes of alienation and existential angst so prevalent in today's society. On their new album, band members Yone Dudas and Marco Biagiotti delve into the complex relationship between man and machine and consider how virtual environments can disconnect us from the real world. DF's trademark aggressive sound and atmospheric melodies remains front and centre on disKonnekt and has been further deepened by their recent European tour with Covenant. Released in June 2012, disKonnekt is Decoded Feedback's eighth full length release and includes a collaboration with legendary industrial musician and friend Claus Larsen of Leæther Strip.


2013 has been an exciting year both in the studio and on the road. After the immense success of disKonnekt being voted one of the top albums of 2012 by renowned Side-Line Magazine, work on the new album quickly ensued. With 2 fully loaded studios and already 10 songs written, there are no limits to what can be achieved by this duo. As for live performance, Decoded Feedback was invited back to play the prestigious Wave-Gotik-Treffen and also headlined one of the stages at the famous Castle Party in Poland. Anticipation for 2014 has already begun with plans for a U.S. tour, a European tour, festival dates and the release of their 9th full length album. 2014 is sure to be an outstanding year. The future is bright and the horizon seems endless.