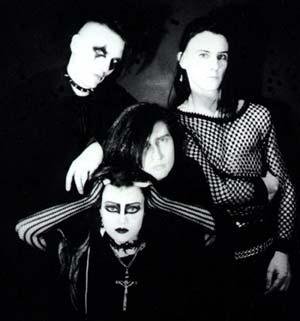 Corpus Delicti created beautiful haunting grooves. The band started in 1992 and broke up in 1997. Five years, four studio albums and two compilations on Cleopatra for the USA. They toured all over the world, from France to Germany, UK, USA, Spain, Italy...All those years on the road, and their very personal and emotional music made a cult band of them. The albums, hard to find for a few years, are now reissued on the French label D-Monic Records.

Although Corpus Delicti doesn't exist anymore, we can still listen to what they have left behind.

Jerome created industrial NKVD and Electronica Gom. Recently, he has set up a mastering studio. So if you're a band and want your tracks mastered, that's here:
www.airmastering.com.

For a few months now, the band has decided to take in its hands what's left of their music and has worked together on a new digital compilation available exclusively there:
http://corpusdelicti.bandcamp.com/

And at last some exciting news, Sébastien, Chrys and Franck are back together in a brand new project called Press Gang Metropol! You can join them here:
www.facebook.com/pressgangmetropol.