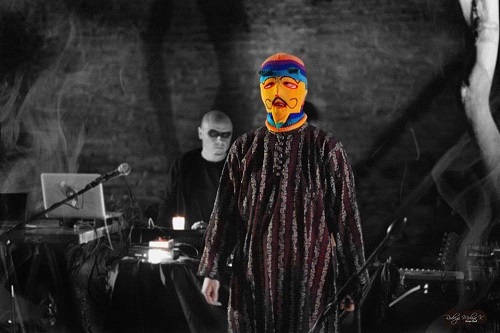 CASA DE ORATES was born as a concept by the end of 2009, on a trip that Manuel Knwell made to the mountains of Chile, more specifically to the town of San José de Maipo, where he spotted a big old house in the distance, on top of the mountain. Curiosity brought him up to where this house was, not knowing that this house was nothing short of a madhouse. When he realized of that, the name Casa de Orates came to his mind and decided to make it into music, at first he did not have any definite ideas, but had the strong idea of creating something "Trip hop" style, especially inspired on MASSIVE ATTACK.

Knwell started composing without knowing what style it would end up to be, only following his heart. On February 2010, he composed his first song, the theme was "One night in the hospital," based on Knwell experiences, this way he begins to invent a concept for CASA DE ORATES. Then, he creates "Interlude Into the unknown". At Easter of 2010, he creates a "language" and uses it in "Animas en Penumbras" a song that is meant to communicate with the dead.

At the same time he creates the logo and the Argentinean musician and designer Federico Pasiecznik creates a font and flyers, giving CASA DE ORATES a definite identity.

Initially, friends and guests collaborated with the project, doing the vocals on "Animas en Penumbras" and "Interlude Into the unknown", plus the arrangements for "One night in the hospital" and "Collapse." Later, Knwell took the direction of CASA DE ORATES by himself, making up the rest of the songs, except for "Squizophrenia" where he had the collaboration of the classical composer César Gacitua, besides Sergio Peralta collaborated with his sax on the same track, giving an even more experimental touch to CASA DE ORATES, where you can appreciate the search for new ways, using methods such as atonal music and free jazz. Sergio Peralta also collaborates with “The song of long shadows” where he improvises with a touch of Dark Jazz.

To complete the album, Knwell has composed 12 songs (plus a bonus track) By the end of March 2011 the disc has been edited, Knwell is looking for a record Company to edit it either as a CD or vinyl.

It is not easy to define the music of CASA DE ORATES, sometimes Minimal dark ambient, Noise Industrial ambient, Drone, Docta, Dark Jazz, etc. It is a mixture of things that have influenced Knwell throughout his life.

The disc name is “No pain… no hope”. For the final product he has invited Serena Toxicat, leader of PROTEA and the duet STARCHASM among other artists.

Knwell has received contributions from artists in Argentina (Trasluz productions) who produced a video with his song “The enigma of the moon” and in Chile (Álvaro Cabello/Necropolis Art) who made a video for “Vox Lux” and “Fireflies”. You can find them on Youtube.