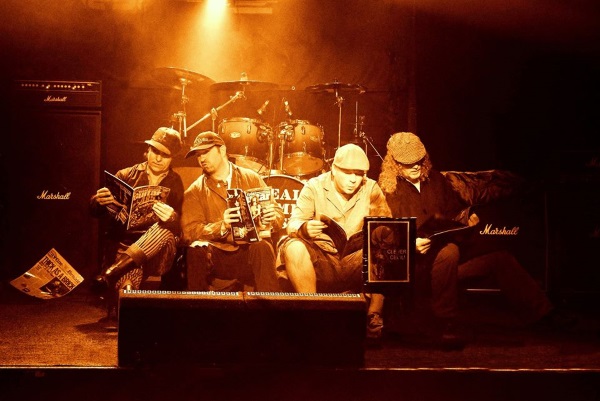 Formed in 1984 by bass guitarist Pat Rowbottom and based in Derbyshire, England, Cold Flame began as a four-piece band performing original blues rock music in and around the pubs and clubs of the north west particularly in Greater Manchester. The band also featured blues guitarist Dave Conner who remains to this day as an occasional band member. Over the next few years the band developed and expanded to a five piece featuring twin lead guitarists and they established themselves as an exciting live act performing original quality blues-based music whilst also presenting audiences with music that echoed the progressive rock genre. Cold Flame released their first studio album 'On Thin Ice' in 1991. A collection of original blues rock songs most of which were incorporated into their live shows. Following a significant line up change in the mid 1990s and now featuring both keyboards and woodwind in their sound, the band returned to the studio and recorded their second album 'Stormcloud' which was released in 1999 and received critical acclaim in the media and a short term signing to EMI. Cold Flame began touring more extensively around the country on an annual basis whilst also releasing a number of further studio and live albums featuring the band's original blues, blues rock and folk music. Coinciding with the recording of the band's second album in 1998, Cold Flame also began presenting audiences with a separate show performing the music of Jethro Tull in an expanded five-piece line up. The band have continued to perform these tribute shows both in the UK and occasionally in Europe on an annual basis earning the band the reputation of one of the leading Jethro Tull tributes in the UK.

Today, Cold Flame's original blend of electric and acoustic material continues to attract local, national and even some international radio airplay both in the UK, Europe, Australia, USA, Canada and South America helped by a succession of studio and album releases which remain available direct from the band. The last few years have been very active ones for the band consolidating their reputation with tours around the country as well as appearing at many music festivals and concert halls. They have also been equally at home in the more intimate atmosphere of the many regional blues clubs and smaller venues still promoting quality live music. Cold Flame have been featured on Sky and terrestrial T.V. music specials and performed with members of the famous River Dance troupe. Apart from headlining indoor and outdoor venues across the country and occasionally in Europe, Cold Flame have also supported numerous UK blues and rock music acts including The Hamsters, Curved Air, Mick Abrahams Band, Blodwyn Pig, Wild Turkey, Dr. Feelgood, Uriah Heep, Jon Amor Blues Band, Michael Katon, Solstice, Take Three [ Pentangle] and Hawkwind. They are a band who have also had some experience of television and continue to be involved in occasional radio interview and live session broadcasts.

Whilst performing mainly in the public sector, Cold Flame have also featured at major private functions throughout the Midlands and the North of England working alongside some of the top music promoters in the U.K. in both indoor and outdoor settings including major hotel chains, sports clubs, local authorities, regional health services, local & national charities and stately homes. Clients are numerous and these bookings have given the band the opportunity to actively organise events and perform in front of large audiences as well as actively support many fund-raising campaigns. Cold Flame are very proud of their support for worthwhile charities across the UK which has realized thousands of pounds for many areas of the local, regional and national community.