"In a time of universal deceit, telling the truth is a revolutionary act." – George Orwell

Released in 2013, The Night Watch is the debut EP from The Bellwether Syndicate, a group of Chicago-based operatives of the sonic avant-garde, intent on speaking truth to power with a sharp tongue.

Fronted by veteran artist William Faith (of Faith and the Muse) and Sarah Rose (aka DJ Scary Lady Sarah), The Bellwether Syndicate are, as illustrated by their debut, coloring outside of prescribed genre lines, choosing here to push the boundaries of style and substance into something relevant and vital.

Kicking it all off is "All Fire," casting the band as prophets of the descent, with a vocal call to arms for the disaffected and downtrodden, all set to a combustible blend of sharp synths, droning dark-indie guitars and a glam-slam beat. The EP's title track, "The Night Watch," takes it up a notch, moving on from stoking dissenting fires to documenting and outing the corruption of our modern institutions, heeding the call to "become the media," broadcasting seeds of hope and change on the late-night wind, over a dynamic and driving blast of post-punk sound and fury. "101: Go" is a hedonistic romp through the glory of live rock and roll as we all know and love it -- hard, fast and visceral; this is the soundtrack to getting ready to go out for the night, doing your hair in the mirror with a wry grin, knowing that you'll be coming home spent, sore, and infinitely richer for the experience, all wailing riffs and pulsing beats to make the point, with Faith's voice moving from a sexy croon to commanding scream just in case you didn't get it. "Translucent" eases the tempo via a lush landscape of cascading shoegaze guitars, slinky bass lines and shuffling drums, with an introspective lyrical turn by William on love and the human condition, never quite sure of what someone else sees in us, and striving to be deserving of such gifts. The EP closes with "You Can See Through Me," a shimmering slice of pure dream-pop featuring the haunting vocals of Sarah Rose, evoking an atmosphere of love letters written on perfumed paper, while bright, crystalline melodies chime away en route to the big finish of this fragile but beautiful moment.

The Night Watch boasts rich production and pristine sonics, produced by The Bellwether Syndicate, recorded by William Faith at his Zone ø Studio, mixed by Chicago's New Canyons and mastered by Adam Stilson at the duo's Undertone facility in the Windy City.

While the music is written and recorded by William and Sarah, the live show features collaborators Philly Peroxide (keyboards/percussion), Spencer Kiss (drums) and Paul Sin (bass). The Bellwether Syndicate present a powerful and commanding live performance, where the sound and substance of the recorded work truly comes to life; where the art is made whole by the audience -- and this is a band that knows how to connect with its audience: not a typical fan base, but an engaged and invested network of family and familiars spanning the globe.

With a handful of well-received live shows in their wake, The Bellwether Syndicate are currently beginning production on the video for the song "The Night Watch," which will be followed by more touring, and a new recording project on its' heels.

Are you on The Night Watch? 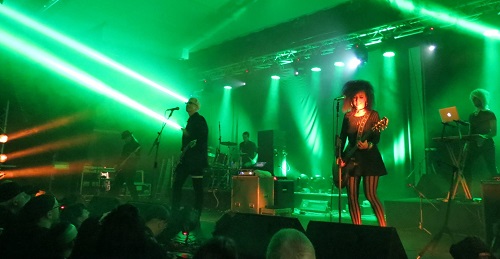