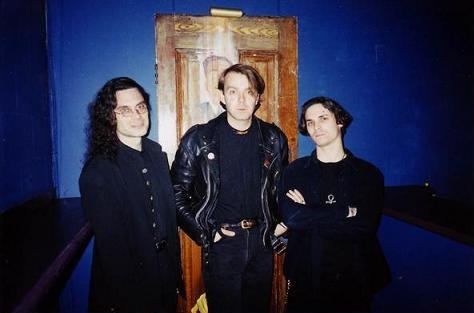 David Rout first began !Bang Elektronika as a solo project with various guests. The first full length cassette "Audio Beat Warfare" was released on the Bombshelter label. After contributing vocals on the the second cassette (The Rhythm Screams Electronic), Andreas Gregor was asked to become a permanent member of the band in 1989. Their first release with the new line up was a six-song cassette entitled “Aktivierung”. Two songs from the cassette were released on the “Metro Tekno” compilation CD by San Francisco based Silent Records in 1992. !Bang Elektronika released their first full length CD titled “Aktivierung” on Germany’s Hyperium label in late 1993. After a lenthy hiatus due to legal reasons, the band independently released “This Heaven”. The album enjoyed excellent reviews from both the public and music world and has enjoyed airplay within clubs in the cities of Toronto and Edmonton, as well as on many play lists from Australia, Germany, Spain and the US. Even though TOY's remix of Aktivierung had generated a lot of critical attention. the band's final demo, Radio Aktivity was universally turned down, the band called it quits in 2004. Ironically, This Heaven was released digitally in 2008 and without any promotion, has sold 6000 song downloads to date.

Thanks to the efforts of Torbin Schmitt at Infacted Recordings, there has been a massive rise in interest in the Band. A brand new Compilation CD, Aktivierung has reached the top 10 in the German DAC charts, and a reunion show is in the works.