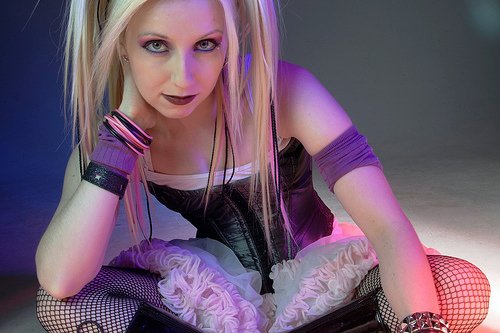 Toronto based Jennifer Parkin is a performer, singer, songwriter, and the creator of her solo electronic music project Ayria. With a fan base ranging from underground electro, industrial, goth, dance, and pop, people have referred to Ayria as the darker version of Lady Gaga, or the industrial Madonna. Jennifer Parkin has become a bit of an icon in the underground electronic and industrial music scene since starting Ayria in 2003, with her unique writing, singing and performing style and music with an in-your-face sonic approach that combines electro, synth-pop, industrial, 80’s dance, distorted gritty beats and synths, haunting melodies contrasted with angry distorted chanting all wrapped up with pop structures and catchy hooks.

Ayria has been intensively and successfully touring across the globe over the past 5 years gaining a very solid reputation for putting on energetic live performances with her live keyboardist and electronic drummer in tow! Ayria recently finished up a successful headlining 2011 Spring tour of both the U.S. West Coast and North East in 201l after a full U.S. tour in 2010. Ayria has toured Jenn’s home country of Canada, and then followed it up by touring the U.S.A and Europe opening for legendary band VNV Nation in 2009. Ayria has supported dear friends The Cruxshadows on two 3 month long U.S.A tours as well as a 2 month long tour through Europe and the UK. Ayria has also performed in Japan, Russia and Mexico and played notable festival events such as Dragon*Con in Atlanta, and Kinetik in Montreal in 2009, INFEST in the UK in 2010 as well as TRITON FESTIVAL in NYC in 2010. Ayria has also toured alongside bands: Combichrist, Project Pitchfork, and has played shows with Front Line Assembly and Front 242.

Next up, Jenn is currently finishing up a 4th CD titled “Plastic Makes Perfect” to be released in late 2011 on Belgium label Alfa Matrix (FRONT 242, LEÆTHERSTRIP, etc.). Like the previous highly acclaimed release “Hearts For Bullets”, the new CD will also be produced in Canada by Sebastian R. Komor (ICON OF COIL, ZOMBIE GIRL, BRUDERSCHAFT, etc.) On this 4th release, fans can once again expect a diverse release full of intense danceable and stompy electro songs, with dark melodies and lyrics full of self exploration but a further refined sound as Ayria pushes further ahead to once again create something unique and addictive.