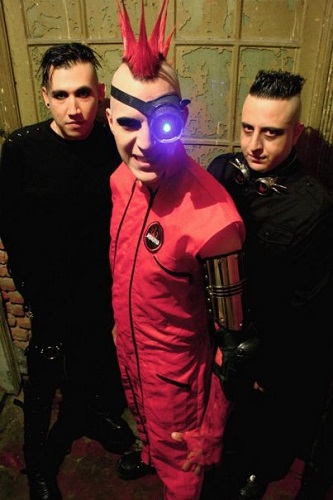 Amduscia woke up from Hell in the spring of 1999. Polo, Edgar and Raul decided to express in their music the pain, cruelty, madness and rage produced by living in a difficult place, "The real Hell, named Mexico City..." Following their first release, a demo called "Perdicion, Perversion, Demencia," the prestigious German label, Out of Line, inserted the first of Amduscia's tracks for the world, "Evil Song" and "Profano tu Cruz," on its famous compilations, Machineries of Joy Vol. 1 & 2, both of them were very succesfull.

In November of 2003, the acclaimed debut album of Amduscia, "Melodies for the Devil," was born and it remained in number five place on the DAC for several weeks. This was followed in early 2005 by the "Dead or Alive" EPCD, which remained in the number 5 place as a single. Amduscia has played in venues around the world and taken part in some of the most important festivals in Europe, such as WaveGotikTreffen (2004) and M'era Luna (2005,2010). Now Amduscia is signed with Metropolis Records, so you can order our latest album, "From Abuse to Apostasy," through their website.

Remember: "If you are thirsty to enter a dark and virtual dimension, or maybe just really into music, come here and if, by chance, you can't see who is playing, it is that Amduscia decided it. In the medieval demonology it is said that there was a duke from hell specially dedicated to music, who could offer a concert without the audience being able to see the instruments being performed. Amduscia transmits on its music the dark side existing in human being and in other entities, reflecting the chaos and aggression we live day by day. With electronic music, technology allows you to witness an entire concert without seeing the instruments being performed, justifying the name "Amduscia."