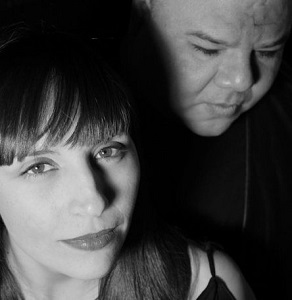 Amáutica is a duo formed in late 2008 in the city of Llavallol , Buenos Aires , Argentina . Composed of drummer Romina Dusk , and the writer , storyteller and novelist Eugenio J. Cáceres , " The Guru " on guitar and vocals . " The Guru " always combined his love of literature with rock and thus met Romina, who shared the idea of shaping some tunes that had arisen during the last time, where he had been held writing . after two years of intense rehearsals , where they devoted themselves to the pursuit of its own and unique sound, were a number of songs whose lyrics reference is made ​​to several of his favorite writers and esoteric subjects , with simple, straightforward melodies, and specific arrangements and powerful, that Romina provided from the base.

In late 2010 his first independent production called " The dark touch of the impersonal " promoted by Sombrati Records from July 2011 was completed .

In late 2011 - early 2012, they record again, this time an EP "The Secret Centre " , and published independently, with great impact on the European and Latin American dark move.

In mid- 2012 the band joins bassist Christian Vega, who achieved an even more powerful sound empowering the band to a new level.