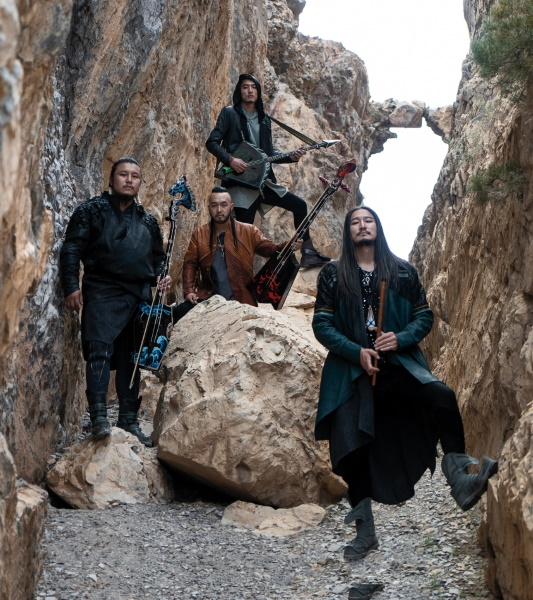 The four members of the band, The HU present a special blend of Mongolian folk music and Rock. This mixture has been presented in their music and have taken the music world, YouTube, and the Internet as a whole by storm.

The music in The HU gives a rare glimpse into the music and instruments used to make the music of Mongolia. However, they are not limiting themselves into a "Folk" format as they masterfully weave this style of music (Hunnu) with Rock music. The combination is something that stands out and has enthralled countless with the pure creativity, dominating beats, and distinct throat singing.

The HU have presented alot of songs that are in many respects lightning in a bottle. Some have made their music videos go viral, others have garnered a ton of praise in their performances, and this is one of the rare bands that seems to just be getting started. They have shown a high level of originality in presenting Hunnu Rock to the world that shows their culture, their love for music, and their keen intellect.

Each of the band members in The HU also stand out in that they are college graduates. That is impressive in any area of multi-media or arts. These four musicians have used The HU to funnel their intellect, creative vision, and Mongolian heritage into something that stands out in the world in a profound way.

2019 was the year of North America for The HU. The toured all over the continent and performed for the masses. Now in 2020, they have their sites on Europe. January will mark the start of the tour across the Atlantic as they present their unique music on this tour. They hope that they will gain the same level of praise that they earned in North America. Based on their music alone, this will happen as they continue to show the world their special flavor of Mongolian music that will make their fans wanting more.

The HU is a very gifted band that has left the world impressed so far. We deeply admire their talent, love for music, and desire to share the beauty in Hunnu Rock. These are a few of the countless reasons that we are honored to have The HU as Music Eternal's January 2020, Band Of The Month. The HU's Quarantine Update From Australia