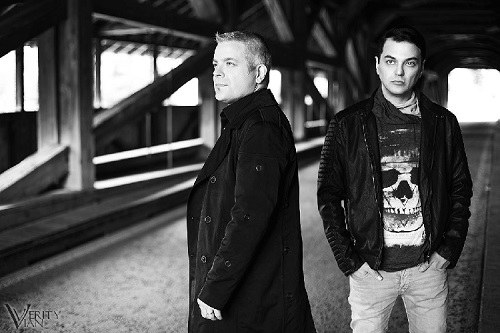 NamNamBulu is composed of the talented duo Henrik Iversen and Vasi Vallis. These two have been among the true powerhouses in Synthpop music. Their music has been a fan favorite and a guiding force to other musicians in the depth of beauty that can be found in this electronic genre. They skills have also made it where NamNamBulu's music has been able to bring in aspects of EBM, Elctro-Industrial and other genres tied to the Electronic world of music. These two have shown in NamNamBulu a truly impressive love for their music and the fans that adore the creations they release to the world.

Match 2017 is a special month in that it marks the release of NamNamBulu's latest album, Borders. This new album presents ten new tracks from these masters of Synthpop which have been considered by many in the music world to be one of the true high lights in the music released in the spring of 2017. Borders has also had a number of special things tied to its release. NamNamBulu presented a limited pre-release of the album to those that were quick enough to pounce on it. This limited release was signed by the band and gave the people that got it a chance to hear the new music prior to the release on the 10th. There has also been talks that the band will be doing a number of select concerts tied to Borders here their fans can hear the new songs firsthand in a setting that only NamNamBulu can create.

For all that NamNamBulu has done both prior to and leading up to their release, Borders, we are honored to present them as Music Eternal's March 2017 Band Of The Month. Be sure to check out the second page of this article to hear some of the music from this impressive band. Now Or Never by NamNamBulu