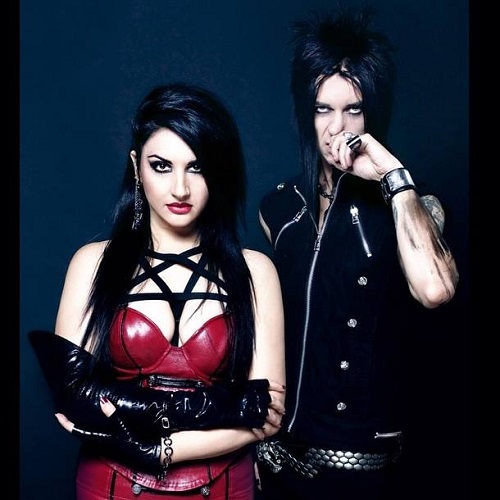 Helalyn Flowers hit the music world like a roaring storm in 2006. Since then this duo of Nøemi Aurora and MaXX have been keep the momentum going with their impressive genius and wealth of talent. Together they gained a presence on Myspace and Vampirefreaks and have spread to many other social medias presenting their distinct style that touches many aspects of Rock, Metal, Punk, Goth, and Electronic music.

The powerful vocals of Nøemi Aurora have often been compared to those of Amy Lee, Shirley Manson, and Bjork. Much of these comparisons give a glimpse to her vocals, but a person should listen to Helalyn Flowers to truly gain perspective of her impressive vocal control and range. Nøemi's voice combined with the style of music that is presented in Helalyn Flowers makes for an impressive duet of vocals and melodies that few can rival.

The quick gain of success and the keen perception of direction in music enabled Helalyn Flowers to have a wide level of success in solo performances and sharing the stage with other established musical acts. They have shared venues with artists like Attrition, Gothminister, Theatre Des Vampires, and Emilie Autumn.

In addition to their success as a live performance they have found other avenues that have presented themselves. The fresh direction in music that Helalyn Flowers forges has given them the chance to collaborate with other musicians like Chris Pohl of Blutengel. These collaborations have created new songs that have surprised their many fans in a very positive fashion.

As time passes, Helalyn Flowers' duo have shown that they are one of the musical acts that continue to explore the frontier of music. This expedition not only shows vitality in their music, but many new facets to their distinctly dark and beautiful compositions. It is this special combination of fearless creativity, passion in music, and potent talent that has fused into music that continues to enfold the emotions of their fans. This has made them a beloved band to those that have had the opportunity to hear their music and for them to be one of the true gems in the Alfa Matrix family of artists.

Nøemi Aurora and MaXX have always been two of the great people in the music world that have earned our respect and eternal bond in friendship. They are also one of the artists that we deeply admire for their talent and desire to share this talent with the world. They are never stagnant and always moving in unexpected directions that has created music that many relish to hear. All of these impressive accolades are just the tip of the ice burg where we are honored to have their musical act, Helalyn Flowers, as the Music Eternal Band Of The Month for May 2016.