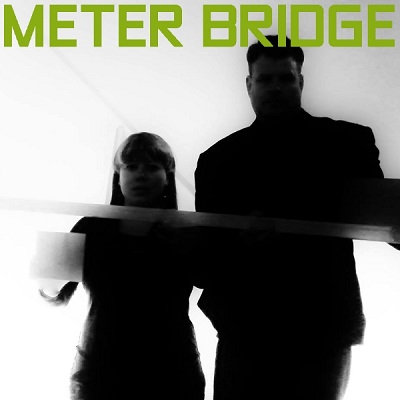 Meter Bridge is a duo of musicians that have harnessed and fused Dance, Post Punk, and old school Alternative into a harmonious mixture. Their music has been one of the glimmering diamonds in the sea of music that is still rising to the surface from the underground scene.

Meter Bridge is a Canadian creation that started with Richard Kleef leaving a band and buying a synthesizer. From there he began forging new songs with Jill Beaulieu listening from an adjacent room. As time would progress, her involvement increased and before long they had created over 20 songs that showed their passion in music. These songs also showed how both worked seamlessly together. It was at this point that they realized that together they had created something special in Meter Bridge.

Since this magical time together making beautiful music that showed an intelligence in melody, they have continued forward in their evolution as a band. Their mutual love for music was the foundation to many parts of their lives together and this shines in their songs. Each one is created with a love and care of two parents embracing a child brought forth into the world. These songs have been loved by others for the time, talent, and care that have been put into them. Each one created shows the same level of emotion that the first songs had and the vitality that thrives when Richard and Jill are together. The newer songs show the evolution of Meter Bridge and give a glimpse of the direction these two are taking the band. This path they have chosen is one that has excited those that know their music and these two endearing musicians. The future is bright for these two, but it is the path they are on and what they create that has generated a deep anticipation in their growing fan base.

Many use the word love and sometimes they tie the depth of emotion the word should evoke. Meter Bridge has taken this emotion and used to it make beauty in the shape of music that they present to the world to behold. This distinction shines in their music and how it affects those that listen to it. The magic they share in their music is one of the many remarkable qualities they share to the world and is among the many reasons that we are humbled to present them as our November 2015, Band Of The Month.

One special note, we wish to convey a heartfelt thanks to these two amazing musicians for being actively involved with Music Eternal. They have given so much in helping this creation and ensuring that it is there for the music world. Yet another expression of unconditional love that shows how incredible these two are musicians and as people.