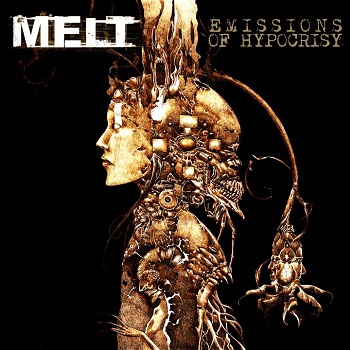 When people thing of Sebastian Komor, Icon Of Coil and many other electronically driven bands come to mind. Melt is proof that Sebastian is an artist that is not bound by any limitations. It is this freedom and his impressive depth of knowledge that has made him so sought after for a variety of needs in the Music World.

In Melt, Sebastian Komor takes music in a different direction with the hard driving melodies that could rival much of the music from Ministry. The mastery in integrating sampling that would make Trent Reznor salivate at the genius in each song. Sebastian has shown why Melt is one part of him that we should not overlook.

With past interviews, Sebastian has mentioned that Melt was his original creation. That this music project was one that he wanted to have surface in the Music World, but he had lacked the time to complete it. This makes perfect sense when you see the level of work that was required for his other projects in Icon Of Coil, Komor Kommando, Squarehead, Zombie Girl, and a long list for other artists. This kind of work load is daunting for anyone, but for Sebastian this is a normal list for a man with a passion in his respective career.

Sebastian's devotion and  love for music is inspiring to anyone that knows him. His knowledge in music has made him a sage and respective comrade among his peers. The open willingness to speak with anyone about music has made him beloved by those that either are learning about the genres he hits or are well versed in the music.

The first album by Melt, Emissions Of Hypocrisy, was released through Metropolis Records in 2011. Sebastian has made it public that he has begun to work on new songs for an upcoming album. The debut album set a challenging standard to what Melt can present to the music world and there are many that are eager to see what Sebastian has in store for us.

All of these reasons are why we are honored to have Sebastian's first creation as our February 2013 Band Of The Month. We hope you enjoy Melt's music as much as we do! In Your Head by Melt