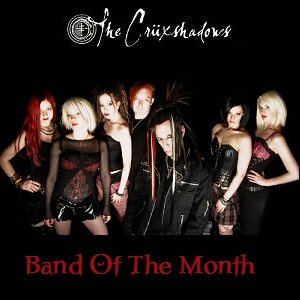 The Crüxshadows have been busy this past little while with a new release, As The Dark Against My Halo,  and also a tour that has stops in the United Kingdom, Germany, and other locations in Northern Europe.

Rogue has been the voice, the creator of the music, and the main driving force for The Crüxshadows. It has been truly awe inspiring to see how they have spent countless days each year touring throughout the world. They have been  releasing a massive collection of albums and a number of innovative additions to the band. These have given the band a level of representation that few bands could ever fathom.

This all changed for nearly two years. The band has been quiet and many have not known what has happened to this incredible band. The truth be told that Jessica and Rogue had a beautiful baby girl and they took the time off to spend as a family. This time was vital for them and in appreciation for all their fans, they are at it again with a new album and this tour throughout Europe. Don't feel left out America, The Crüxshadows also have a concert planned for the end of August for their countless fans.

The band has expressed their thanks to all the support to their fans in the music that The Crüxshadows has made and in the time they took off for their new little family. For all of this we are proud to have The Crüxshadows as our August Band Of The Month!