Vlad In Tears is an Italian powerhouse that began in 2005 and has been taking Europe by storm.

I am deeply honored to have a chance to chat with you, Kris Vlad. Your band is truly impressive and has so much incredible music. Your music has been getting a growing fan base that is very impressive to see. 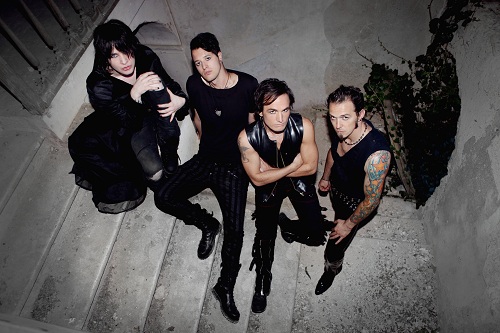 The name of your band is truly unique and shows a bit of thought to it. To have one of the legendary figures of Eastern Europe and an emotion that is not traditionally tied to him shows two elements that most would never think of. In a sense it shows the harder elements of your music (like Vlad), and the heart felt tone of your music (as in tears). Was there a deeper meaning like this to the name of the band?

When i thought to make this project i was very very excited by the idea to talk about deep, good and (mostly) bad feelings, walking through my favorite kind of "world"...the Vlad's world...a man who denied his own god cause he lost his love and became a demon...among a million of tears...that's the best hate/love story of he world for me...and this is what Vlad In Tears talk about...."how do you really could do when you have lost something so much important for yourself? what could you become?"

Some people have assumed that Vlad In Tears was one of the older Gothic Rock bands like Nosteratu, Bauhaus, or Corpus Delicti. Maybe a band that was undiscovered in the older music. Has this been a surprise to hear at all?

hehehe...What can i say? It sounds good to me cause i love these bands and this kind of music and I know that with so many bands around the world sometimes it's not so easy to make the people hear you and know your music...