Some bands have special meanings in their names. Does Scarlet Harmonies have a history in the name or something that inspired this to be the name?

Well, originally when the name first came about I was in another band Six Shadows with a few buddies of mine that I had met through facebook that were relatively local,
one day when we were chilling out after a practice I mentioned a name change because our style had changed so much with the two members that had joined at that time frame of the band, and I had been watching V For Vendetta, an amazing movie about revolution that actually played influence in a lot of my earlier [SH] demo's, and the reason I came about with the name was the final fight scene of the movie, when V gets shot for those few seconds and then stands back up to say "my turn" he throws the two knives, and they have a whistle, and the whistles actually make perfect harmonies as they pan when you hear them on speakers, and of course, blood is a scarlet color, so I guess I just over analyzed one of my favorite movies in the end of it all. 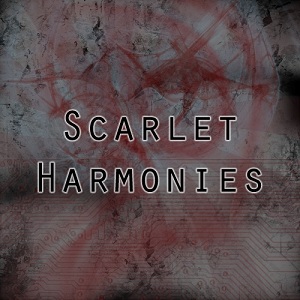 What was the motivation in the combining of electronic and metal in the music that you are creating?

Well originally when I was growing up I was exposed to a lot of country music, and typically people quickly grow out of what they are exposed to when they are growing up as they hear and see new things, and when I was 7 I first head of the American rock/nu-metal band (in their older days) Linkin Park, and they actually had a DJ, "Mr. Hahn" in the band, so since I first started music really I had been exposed to rock and metal bands that blend electronic genres like rock-hip-hop and what I guess could of been deemed as "Tech-Metal" through bands like Adema, Machinae Supremacy, and Celldweller. I bought a set of turntables at young age that were pretty much a joke but fell in love with them and played around on them all the time when I was young, but it wasn't until I got older and really started listening to those genres and bands again that I fell in love with the idea of blending electronics with metal and rock, and what really started that idea in me was Celldweller and artists like Nero, Jakwob, Blue Stahli, and Bullet of Reason, I had been a dubstep producer for a couple years before the idea of Dub-Metal and things like that spawned in my head, and at the perfect time almost a friend got in contact with me who had access to a studio, and their producer wanted to know how to make dubstep, and so I went to teach him and the guy that actually brought me started jamming some guitar to my little ideas, and so it started there, and that band actually stuck together for about 4 months before some unfortunate events happened.