Q: What was your motivation for creating Klutæ?

A: It was actually my old label boss Talla 2xlc, who asked me if I would be interested in doing a side project. And then I just sat down and played with ideas and sounds I usually didn't use. And then we released the first EP.

Q: To you, how does Klutæ standout in comparison to Leæther Strip?

A: Klutæ has a lot more of my Punk roots in it. It's my playground and anything goes. The songs are much more 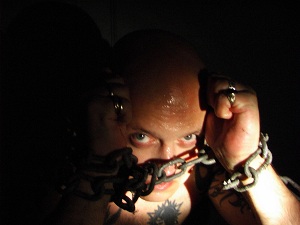 spontaneous and I do not fiddle with sounds and tiny changes so much. It's more in your face and with a garage feeling to it.

Q: Klutæ was once known as Klute. What was the reason for the change in name?

A: Because a British jungle techno band decided to steal my name. Then I changed it so my listeners wouldn't think that I was that band too.

Q: Have you had any complications due to the name change or in getting the word out that you are not Tom Withers (The person currently using Klute)?

A: Only that I got angry mail asking me why the hell I started to make that "crap".

Q: Klutæ had a series of albums that came out in the early and mid-90's, then stopped. What was the motivation to revitalize it with new albums (Sinner & Hit 'n' Run)? And do you see a new album in the immediate future of Klutæ?

A: Well Leæther Strip returned, so it was also a good time to bring Klutæ back to life. Yes I am actually working on a new Klutæ album right now. This time it's back to the old Klutæ ideals. Title of the album will be "Electro Punks Unite". I hope to get it out Spring 2011.