Attrition is one of the bands that has had a profound impact in the Dark Ambient and Darkwave worlds of music. They have proven that a band is not bound by a style, era, or genre. On August 13th of 2010, I had the pleasure and honor of having Attrition front man, Martin Bowes, answer a number of questions in the first of two interviews.

Q: Many bands surface and are lucky to stay as a band for a fraction of the 30 years that Attrition has been around. 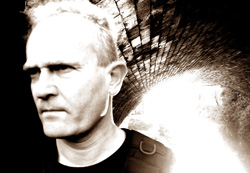 How have you been able to make Attrition endure and also thrive with such new original material?

A: It is something I HAVE to do. I have no choice. it's not always been the easiest path to choose but it has certainly been the most rewarding I can think of....and I am always striving for something that is just out of reach.... that is the answer I think. Never settle. always take life a little bit further...it is so worth it.

Q: Did you expect Attrition to be what it is today when you started it?

A: I really don't know what I thought when I started it... I would have had no idea I would have been here now... a few miles from where I started everything... :) and half the world in between...

Q: Much of your music shows a high level of complexity with underlying melodies, a fusion of genre styles, and even incorporating styles from differing eras. How did you develop this unique and impressive means of composing?

A: I have never set out to consciously create any particular style or method...things have developed over the years and influences have come and gone... and some linger perhaps... and yes occasionally I revisit... a lot of the time I strive for simplicity but I know there is depth in that simplicity... if I can find it...

Q: It seems that the music world has a standard for stereotyping. One set style or base genre for a band, or a music tempo. You are among the very rare performers

that has shown that you are both capable and versed to span the boundaries that seem to be set in music. Was this something you had envisioned with Attrition?

A: Again I had no idea...when I started I was very influenced by punk and particularly the post punk and emerging electronic experimental sounds of the early 80's...all I knew was that I had something in here that I needed to get out...to express myself with sound as I had previously at art school with images... I am not a trained musician and know little of music theory... so styles are meaningless... do what thou will... :)

Q: You have mentioned in past interviews that bands like Velvet Underground, Kraftwerk, Sex Pistols, Elvis, and even Beethoven have been influential in your music. Is it a shock to hear bands in the more recent years that have mentioned that you have been an influence for them?

A: It's not so much a shock...but it is humbling to know that my music has touched people enough to go and create their own music.... ultimately that was the reason for this in the first place... to reach out to people and touch them in the same way I have been touched by others music and art...