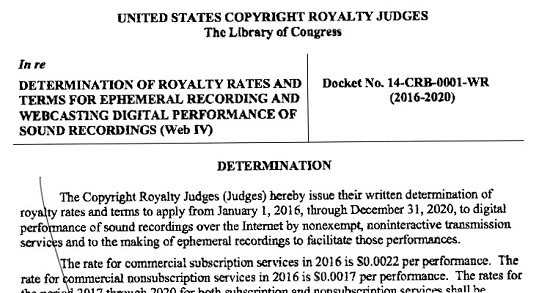 Every five years the US royalties are put to set rates. Here we will be looking at the rates that went into effect Junaury 1st, 2016 after multiple appeals are now locked in until December 31st, 2020. Regardless of what format the commercial webcasting and/or sound presentation may be, these rates will effect all commerical and some non-profit entities using the Internet within the United States.

The first requirement is that each station or channel used for broadcasting is required to pay $500 USD before any broadcasting can be done each year. This ammount will be deducted from the royalties and any remaining balance at the end of the year will not be refunded.

This is for non-subscription digital performances, including Internet radio, FM radio streaming on the Internet, and any other means of digital presentation without any form of membership. The rates are broken down into 4 parts for each station: the fixed rate ($0.0017 per song) multiplied by the number of listeners multiplied by the number of songs per hour multiplied by the number of channels the boradcaster has. So if an Internet radio station plays 9 songs in an hour with 10 listeners for each of their two channels would result in a royalty fee of $0.306 cents owed for that hour. If they keep the exact same number for the month it would be $7.344 USD per day or $220.32 USD per 30 day month. For established stations that were pay a fix amount per year this has increased their royalty rates exponentially.

For sites that require subscriptions (iTunes, eMusic, etc.) there are now different rates exclusively for them. The structure is the same as with non-subscription except that the per song rates have been increased to $0.0022 per song.

For non-profit entities, they are granted 159,140 aggregate tuning hours per month. After this they fall into the commerical category of non-subsctrition rates. For most non-profit stations this will have no impact. They are still required to pay the $500 annual fee per channel per station.

These rates have been appealed multiple times with no results in favor of the broadcasters. At this rate these are almost certainly the set rates until the end of 2020 for United States Internet broadcasting. US Internet Radio: Is This The End?