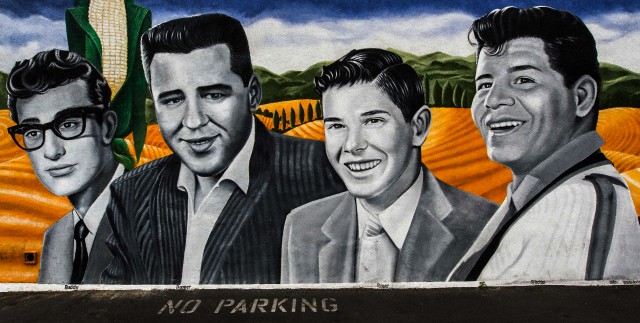 The anniversary of "The Day Music Died" has come and gone, but the impact of that fated plane crash remains today. Each of the music artists that died that flight had a future that would have defined a genre of music and the culture that was founded on its growing dominance. In this article and the ones linked at the bottom we will look at the impact this plane crash had for the Rock & Roll genre and the direction that music took due to their deaths. Some may argue that Rock & Roll lived on when these three died, but the evidence shows that is far from the truth.

Buddy Holly was the established young music writer that Bob Dylan felt was a worthy rival, someone to help Dylan propel his original choice in Rock & Roll to new heights. This was something that Bob Dylan admitted to decades later. The fate of Buddy Holly's demise and the additional impacts his death had in the Rock & Roll genre would result in Bob Dylan exploring new avenues.

Ritchie Valens died 17 years old, in the roughly one year that he was involved commercially in the music world he had already released a number of hit songs including: La Bamba, Come On Let's Go, We Belong Together, and Donna. He was seen as the one artist that could fuse the Mexican culture in the emerging Rock & Roll genre. This would have opened the music world to countless emerging artists in Latin America and would have created a massive resource in musicians that could have evolved Rock & Roll further and had a lasting impact in all the countries "South Of The Border."

J.P. Morgan (also known as the Big Bopper) was the oldest of the trio, but was probably the one that was just getting really established as a musician. Unlike Buddy and Ritchie who started as musicians, The Bopper started as a Disc Jockey. It was in this different foundation that gave The Big Bopper something distinct to offer the music world that would last even to this day. He has been viewed by some as the DJ that showed that Jockey's could be musicians, he was the first recognized to truly master the skill in making mashups, and by many, is seen to be the grandfather to modern music videos.

February 3rd, 1959 was where it all changed. The death of these three would create a chasm in the music world that would require the British Invasion to help stabilize the loss of these prolific song writers and what they meant to the industry. Some will state that there were other musicians, and that is quite true. Many like Elvis Presley were gifted in the art of singing, but lacked the skills and/or artistic direction in composing what they sang. Others had the knack for both composition and performing, but lacked in the ability of creating consistent hits. Every emerging genre needs to have the stabilizer artists that do everything and set a standard that all the other artists aspire for. This can be seen in Pop (Michael Jackson), Grunge (Nirvana), and countless other genres. Many times when the artists that keep the genre moving forward die either another replaces them or the genre becomes stagnant and breaks up to give birth to new genres.

The British Invasion gave a strong dose of musicians that the US Music front needed, with the Beatles, Monkeys, and many others. It also afforded subgenres to be seen in a national setting rather than a regional one. This is where artists like the Beach Boys were given a rare opportunity that they embraced. Where the Rock & Roll could have seen Bob Dylan and Buddy Holly dueling out the songs with other artists rising to meet them at the top throughout the 1960's, the United States now saw the Beach Boys and the Beatles replacing these two in Rock & Roll and opening the doors for more. There was now a mainstream market like there wouldn't have been. This was also a time where music wasn't just a national standard, but evolved into an international standard. Why? Because one major market needed another to survive and fill the void that never fully vanished with the passage of time. This change in approach would evolve into an industry standard where musicians could expand their music to multiple parts of the world and a variety of new markets.

Traditionally, the main genre dominates and the subgenres come later. The last step, as the main genre begins to fade into the pages of time, is the exploration of experimental music. For Rock & Roll, the subgenres thrived as the main genre existed. When Rock & Roll faded in the late 1960's and Psychedelic Rock took hold, many of these subgenres remained and laid the groundwork to new avenues that would normally haven't been there (based on the standard progression of music). It is this unique direction that created an exploration in music that would make the United States the powder keg of creative expressionism that would reflect the chaos in the real world and would spread to other music markets globally.

If the three musicians that died that fated night in February had survived, would things had gone the same as they do in other genres? Odds are very likely not. It is true that Bob Dylan admitted that if they had lived that he would have gone down the path of Rock & Roll and not Folk Music. It is also true that he wasn't the only one that changed directions due to this loss in Rock & Roll, but there would have been drastic changes if these three would have survived. Buddy Holly and Ritchie Valens churned out a high level of popular songs in a short period of time that would have been the standard in the US music market. Ritchie Valens would have also been the foundation for the US having a form of Latin Invasion, instead of a British Invasion in music. It would have been less impactful, but still would have had a lasting impression in the US and all the Americas. Regional music would have had a harder time gaining national or international level attention as there was no void in the main genre of music to fill. This would have made it harder for Surfer Music and many of the regional styles to get the attention they deserved. It also would have made the impact of the Bristish artists less expansive as there would have been the three artists that lived and those that they inspired to pursue the direction in Rock & Roll.

The Big Bopper had recently purchased a video production company and was laying down the groundwork for many of the ideas he had. These were fundamental for modern Music Videos and could have forced that aspect of music to surface a decade earlier than before. He was also the one true artist that had mastered the skill of mashups (which at the time was the foundation for what would become MC's), remixes, and what would be modern mashups. The Bopper was a skilled singer, but it is in the side aspects of the music industry that his loss put things back by at least a decade.

To go into more depth in what these musicians did and what their impact could have been we have made a page for each: Buddy Holly, Ritchie Valens, The Big Bopper, and one regarding the aftermath of 1959.

Please keep in mind that this is solely speculation, but is based on the information provided in what they had done, were in the middle of doing, and/or the lasting impact their future plans would have had. Some of this is based on historical information, others based on interviews, and the rest based on learning about these three artists and the legacy each of them left behind.

If you are in the music world and are deciding to quit, remember that you are part of a history where your actions inspire fans, culture, and the future artists before. The loss of one artist, could be the loss of many artists you could inspire and possible genres that you could have been the muse in creating. Dreams are worth striving for and sometimes can live on even when you die. Buddy Holly, Ritchie Valens, and The Big Bopper are proof of this.