The Big Bopper, You Know What He Liked 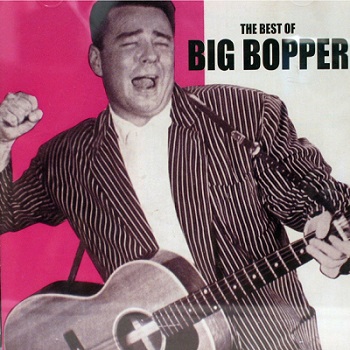 In 1930, Sabine Pass, Texas was where the deep voiced, energetic, and ambitious Jiles Perry "J.P." Richardson, Jr, was born. Starting out as a disc jockey, J.P. would gain his early fame from my unique style that was fusing Rockabilly and Rock & Roll, his deep resonating voice, and he infectiously cheerful personality.

Prior to being the legendary Big Bopper, he was heavily involved in school music programs and took a path in pre-law in college. This path would take a fall on its ear as his passion for radio led him to being a radio DJ. As a disc jockey, he would shatter the record for continuous broadcasting for radio when he stayed on air for 5 strait days, took the name of The Big Bopper, and was the first person to use the term "Music Video." He would also be the first to create music mashups.

Prior to 1959, The Big Bopper had three things in the forming. The first of these was in his video business that was laying the groundwork in artists being able to have music videos of their music. This was still in its infancy, but has been the foundation to all modern music videos. If Buddy Holly is the Father of Rock & Roll, then The Big Bopper is the Grandfather of Modern Music Videos.

The second thing that in the bag of ideas that The Big Bopper had was his emergence in creating mashups. This would lead to him making his own music, but was also fundamental in what modern musicians refer to as remixes, mashups, ultramixes, and supermixes. He was the first to do this at any professional level and present it to the public in a finished state that could rival the original pieces. Many times he was also known for performing the vocals to these mashups and in MCing transitional pieces to help in the integration of the music. These approaches would be pieces that would be commonplace in future genres like Electronic Music, modern Hip Hop, and Pop music.

In the final year that The Big Bopper was alive, he worked heavily in making his own music. This transition from being a DJ and into creating his own music was seen as a hard leap by many. This was a leap that the Bopper not only did, but also made a hit with one of his first songs, Chantilly Lace. It was the popularity of this song that would garner him a spot in the winter tour with chart scorchers Buddy Holly and Ritchie Valens. Sadly, it was on this tour that the deep voiced Texan would meet a somber fate on February 3rd, 1959. He was the oldest of the three artists to perish, at the age of 28.

In his time, J.P. served in the US Army, got married, become a father, and left a lasting legacy in many areas of the music world.