The Aftermath Of The Fated 1959 Day 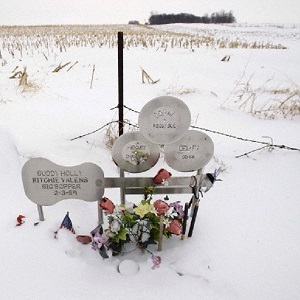 February 3rd, 1959, is a sad day in the world of music. Three great artists perished. We lost three visionaries that had a passion that was unrivaled in their love for music. These three stars in the sky would live on in the hearts of those that heard their music. A genre lost three heart strings in its guitar of melodies.

Yet in this loss, others found inspiration, found purpose, and were able to mend their broken hearts to forge in new directions. These artists would be the new fathers of music that, with the help of the British Invasion, would open new doors that would never have been opened. It is true that doors may have been shut in these three perishing, but through this many learned to stand on their own feet and others found direction they sorely lacked.

One musician that leaned heavily on Buddy Holly as a mentor, friend, and brother in song was Waylon Jennings. Among all others he felt the sting of his own words. He wise cracked to Buddy Holly that he hoped the plane would crash on that fated February night. His comment came true and haunted him for the years to come. He tried to find solace in a bottle and the high of drugs. For him his deepest passion of music was his poison and he couldn't fill the bitter stinging hole in his soul. In time, he would leave Texas and settle in Arizona. The change in pace and location gave him the clarity to clean up his life, mend his own wounds, and forge ahead. He had to accept that the loss of his best friend was not from his words or actions and that the only one he was hurting was himself. This inner peace would help him start a career in Country music that he likely wouldn't have had save for the path his life had taken without his beloved friend, Buddy Holly.

The loss of these three will sting those that loved what they made, but like all aspects in life...we move onward. Love those we knew, be grateful for what they gave to us, and show that our lives on this world have merit for what we aspire to do. If three young men could define music like they did in a matter of short years, imagine what we can do in a full life. Love each day as if it were your first, accomplish everything as if it was your last, and never forget to savor the little things that make life worth living.