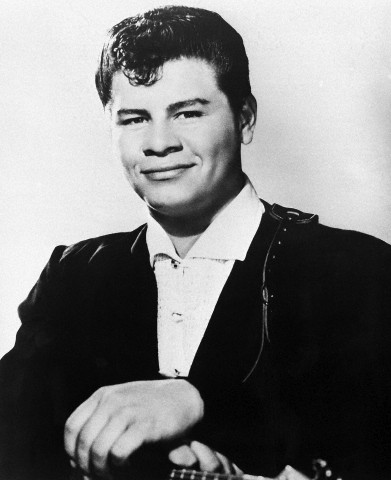 In 1941, Richard "Ritchie" Steven Valenzuela was born in Southern California. At the age of 11 he learned the guitar and played a variety of music in youth that were tied to Country, Mexican Folk, and musical western movies. These would be the building blocks to the Latino boy that was never seen without a guitar.

In high school, Ritchie played for any venue that would have him. This found him in assemblies and parties performing his impressive guitar skills and presenting the vocals that were bringing him a steady demand for more performances. He would eventually join a band called The Silhouettes and saw paying work as a member of this band that was steady for the time he was with them. During one of these performances, a scout for Keen Records discovered in this teen an emerging artist that could reach for the stars.

In the audition that Ritchie had with Keen Records, he showed in an instrumental his mastery of the guitar. The performance he did for them was so impressive that it would evolve into his first hit, Come On Let's Go. This first hit would sell over half a million copies and put Ritchie on the map as a new song writer and musician. Prior to its release, they convinced him to shed the band he was in and work as a solo artist. They also persuaded Ritchie to alter his stage name into Ritchie Valens.

Ritchie reflected in his music what mattered most to him. This was the meaning of his heritage, his amazingly close bond to his family, and the feelings he had for his high school sweetheart. This potent mixture of emotions would lead to his next hits, We Belong Together, Donna, and La Bamba. The first two are filled with romance, passion, and are love ballads that show the depth of emotion that Ritchie had and shared in his music. In La Bamba, Ritchie presented a Mexican Folk song fused with the vitality of Rock & Roll. It was a song that helped light the charts on fire with his music and was a rarity in that the whole song was sung in Spanish.

Ritchie Valens was shooting to the stars and each song he was releasing were instant hits. In Rock & Roll, he was white hot and Keen Records saw that the next step was to get Ritchie on the road performing in front of people with a lineup that would rival him as an artist. This lineup was musical peers that were cutting edge and having a defining roll in Rock & Roll. Buddy Holly, the genius from Texas, and The Big Bopper, DJ and musician that could see the full potential in the direction music was taking. The union of three musical acts evolved into a friendship between the three and regrettably, the fruition of that friendship was never discovered. February 3rd, 1959 all three were on a chartered plane that crashed during a severe snow storm. The storm was quick in hitting and had a power that none were prepared for.

As quickly as Ritchie hit the charts, he was ripped from his loved ones and the countless fans that loved the music he created. What would have happened if that tragic flight had not ended as it did? Ritchie Valens, much like Buddy Holly, was on a heat streak in releasing hit after hit. Both were able to churn out top tier music at a remarkable rate. Ritchie drew from his bonds with his family, his heritage, and those that were in his life. Through all of this he was beginning to open doors to Mexico that could have found him dominating the music world there like few could have. It also would have made it where many of the US artists would have found open arms south of the US more so than before. Just as doors open both ways, Ritchie's music would have inspired countless musicians in Mexico and made it possible for them to be considered in the US market.

To give proper scope in what Ritchie presented, we should look at Martin Luther King, Jr. The great King would be a foundation in a decades long legacy in civil reform in the United States. He wanted equality that would be felt in every minority as he spoke out, expressed his thoughts, and eventually died in this noble cause that all people are created equal. In many respects, Ritchie Valens accomplished a slice of this in the song, La Bamba. The song was embraced by the main music scene and would eventually be made into a mainstream movie. It may not have cried out for racial equality, but it presented a minority culture where it was universally accepted and was considered at the same level as other members of Rock & Roll. Just as Ritchie shot for the stars, there is no telling what kind of impact he could have had on music, equality, and in presenting Latino culture in a different light.