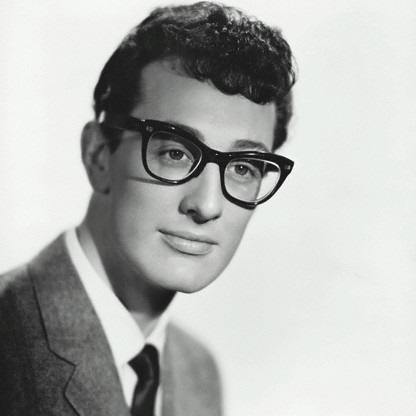 In 1936, Lubbock, Texas would welcome one of the Rock & Roll greats  in Charles Hardin Holley. The love for music and in making a career out of it was always in this youthful lad who at the age of 5 dominated a local talent show. It would be the first paying gig he would have as he earned the $5 prize money for his gifted vocals. This wouldn't be the end of his passions with music.

Rock & Roll started from Rockabilly and pulls from rich roots in Gospel, Folk, Country, R&B, Marching music, and Big Band music. Many artists in the 50's often used one of these as a foundation for their music considering that Rock & Roll was still a fledgling genre. Elvis Presley leaned heavily on Gospel in his early career and Buddy Holly fell for this vise as well in holding closely to Country music in his early years of Rock & Roll. The fault in this was that his heart wasn't in Country, it was in Rock & Roll. Sometimes we need someone looking outside of the situation to shed light to our faults. For Buddy Holly he found this in the sagely advice of Elvis during one of the acts where he was opening for him. Elvis had suggested to shed the Country and embrace more of what was in Rock & Roll. In other words, lose the Rockabilly roots and forge into this new genre without the strings that many artists harbor as a lifeline. It was bold advice where Buddy Holly would have to cut the cord and make a leap of faith in himself and his skills as an artist. He took the leap and his trailblazing path began.

During this time of transformation in 1956/1957, a label made a clerical error in Buddy's name spelling it without the "e" (Holley), it was a change that he adopted and never looked back. These early years were a massive metamorphosis for Buddy Holly and the change in name was fitting.

All the changes that came about, Buddy Holly's band needed a renaming as well. As Buddy and his band mates were often practicing in the garage, they found in their recordings the sounds of crickets on them. This ironically would be the inspiration in naming the band, hence, Buddy Holly and The Crickets were born. During this time, Buddy Holly and The Crickets would enjoy a streak of top tier hits. This would start with That'll Be The Day and would care on with songs such as Peggy  and Oh Boy. Buddy Holly wrote all of his music, but due to contractual agreements had to give partial credit to the band's producer.

The multiple authorship credits to the music Buddy Holly wrote would be hard on him. He found that he had multiple people involved in dictating what he could compose and couldn't. This was too many hands in Holly's creative Cookie Jar. In 1958, Buddy Holly would sever ties with his producer and The Crickets. The divorce of sorts was a legal nightmare for Buddy Holly that would drain on his financial reserves so heavily that he was forced to sign on a winter tour.  It would be this frigid tour that would be the final chain of concerts that Buddy Holly would have and the music world felt the shockwaves of his passing. He was only 22 years old when he died on February 3rd, 1959. He was survived by his sweetheart and wife, Maria Elena Santiago.

Many have wondered what would have happened if Buddy Holly hadn't died. In recent interviews, Bob Dylan admitted that if Buddy Holly had lived, he would have chosen Rock & Rock over Folk and Folk Rock music. Today, Bob Dylan is seen as the greatest song writer of all the Rock genres, and he viewed Buddy Holly as someone that was at his level. If Dylan's expert opinion is to be taken for its own merit, we would have had two of the top tier singers and song writers in one genre working to elevate the genre. This would have likely made Rock & Roll an even more dominant force in the music world with the US being the capital of the global world of music.

Some will dispute that Elvis is the one and only true King Of Rock, and they may be right. The one factor that has been seen in other artists is that an musician can be great with impressive vocals, but to compose their own music tends to make is more intimate to the performer. In this one respect, for many musicians the song is a slice of their heart that they perform and share to their fans. That is where Bob Dylan was able to raise his performances to a standard few could match, and Buddy Holly was another that shined in this respect as well.

In the death of Buddy Holly we lost a great song writer and had another that forged a direction in a different genre. In this respect, On February 3rd, 1959 the world lost the chance to have two Princes of Rock & Roll and the legacy they could have made beyond what they already have.